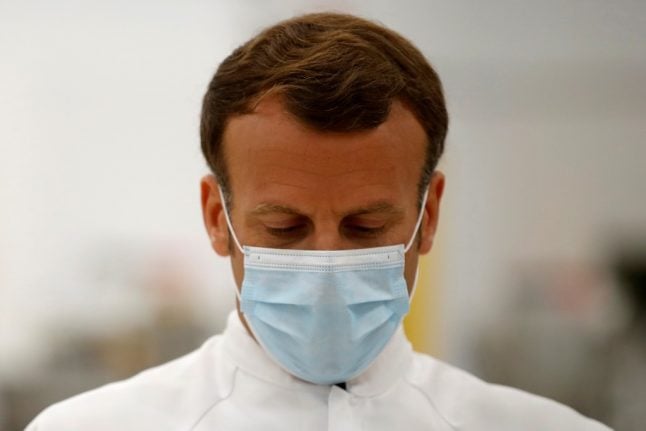 Macron will announce the government's next move during a televised address to the nation on Wednesday night at 8pm.

While French media have been rife with theories on what steps the president will announce to regain control over Covid-19, which lately has exploded across the country, nothing is yet certain.
After the defence council meeting on Wednesday morning, government spokesperson Gabriel Attal confirmed that the final details had been thrashed out.
“The decision has been taken, I cannot say anything more than that,” Attal said during a press conference.
Here's a look at the main theories circulating based on reports from opposition party chiefs and union leaders who met with the French Prime Minister on Tuesday evening.
Another lockdown?
Widespread reports on Tuesday evening suggested Macron and the government were in favour of imposing a four-week national lockdown from midnight on Thursday.
This would be contrary to the government's former line that a nationwide lockdown such as the one this spring would be too costly – economically, but also psychologically and socially – to repeat.
Macron and his government officials have frequently reiterated that they want to avoid a re-run of this spring by any means possible. Their approach since the easing of lockdown has been to impose targeted and gradual measures on a local level rather than blanket rules across the country.
“We are doing everything to avoid another lockdown and obviously to avoid a national lockdown,” Macron said on August 28th.
But that was before virus spread with rapid pace across the whole territory, sending Covid-19 rates surging both in the big cities and smaller towns, leaving few areas unaffected by the pandemic.
MAP: How France's second wave of Covid-19 exploded in just one a month
To counter the spread, the government imposed a 9pm curfew in hard-hit areas, but health professionals and virologists have sounded the alarm this past week that the measures in place will not slow down the spread quickly enough in order to save the hospitals from becoming overwhelmed.
Several hospital chiefs have used to words “out of control” to describe the situation with the virus.
Why a national lockdown then and not a local one?
Up until this week the government seemed in favour of local lockdowns in hard-hit areas rather than imposing confinement in parts of the country where there was little spread.
But the worsening situation in the hospitals appears to have pushed the government towards a nationwide lockdown.
That would help protect hospitals in areas where the epidemic was not “out of control” meaning patients could be transferred to hospitals there from hard-hit areas, as they were in spring.
It would also allow health staff from those areas where the virus is hardly circulating to be transferred to areas like Paris and Lyon, which proved vital in spring to help alleviate the pressure on doctors and nurses in the big cities.
So if Macron does opt for a lockdown it appears it will be national rather than local.
Will this lockdown be the same as the one this spring?
According to French media reports, this lockdown would likely be less rigid than the one from March-May.
It could also be shorter with reports suggesting Macron wants to fix it at a period of four weeks. Although it's worth remembering that when the first lockdown was announced in March it was only due to last two weeks, before the government realised it would take longer to stem the virus spread.
French authorities, like authorities across Europe, are more knowledgeable now than they were this spring regarding what effect different measures have on limiting transmission rates.
That means the government is better equipped than it was back in March to choose measures they know to decrease transmission rates without brutally crippling the economy.
Will schools close?
School closures have been outlined as a measure that has high economic, social and psychological costs and this would likely be a last resort that the government would like to avoid if possible.
French media have reported that schools will remain open – primary schools, secondary schools (colleges) and high schools (lycées) – while professional high schools would have to close.
This would be contrary to the pleas of Antoine Flahault, Director of the Institute for Global Health at the University of Geneva, who said that “schools represent a major risk,” and advised secondary schools and universities not to reopen after the Toussaint holidays, which end on November 2nd.
However the government's line has been that keeping children at home will have dangerous social consequences because those from less resourceful families fall behind, and that imposing home schooling makes remote working difficult for their parents.
Universities will however, according to BFMTV's report, close their doors and stick to virtual lectures.
What about shops?

Shop owners worry that they will have to close their doors again, as they had to in March when only those qualified as “essential” shops could stay open (pharmacies, food shops, supermarkets, tabacs and a few others such as bakers, cheese mongers and wine shops).

There are no details yet on whether all shops that closed last time would have to close in the case of a new lockdown; whether more shops would be allowed to remain open seeing as Christmas is approaching and the government wants to boost the economy as much as possible; or whether all shops simply would be able to stay open this time around.

This was to be decided during the defence council meeting on Wednesday morning.

Will there be a new form to fill out in order to leave the home?
Le Monde has reported that Interior Minister Gérald Darmanin is in favour of making everyone fill out a form on paper or on mobile) – attestation – whenever they leave their home to state the purpose of their errand.
Key workers and those who cannot work from home would, as was the case this spring, have to show a signed declaration in case of police checks.
Currently, some 46 million French in 54 départements have to possess such a form if they leave their home after the 9pm curfew in place in their area.
Will there be travel restrictions?
During the lockdown this spring all travel was banned with some, listed exceptions, meaning everyone had to decide on where to spend the lockdown before it entered into effect. Anyone who changed their place of confinement during lockdown risked a fine of €135.
Some reports suggest Macron could introduce a travel ban tonight, with Le Point indicating a reintroduction of the 100km travel ban, which was introduced as a temporary measure on May 11th, just before the easing of lockdown.
However nothing has been confirmed yet.
But what if Macron opts against a lockdown?

Until Tuesday evening, the main theory was that Macron would announce a weekend lockdown and earlier curfews in hotspots and areas where hospitals struggle to cope with the pressure of new Covid-19 patients.

The president of the Scientific Council set up to advise the government on its Covid-19 policies, Jean-François Delfraissy, outlined this as one of two options (the other being lockdown) during an interview earlier this week.

READ ALSO: What lockdown scenarios are the French government considering?

That would mean either implementing a tougher version of the curfew in place right now across the country, or continuing to adapt measures to local levels of spread, only introducing stricter measures only in areas that have alarming levels of spread.

The latter version is more difficult to put in place in practice because things change quickly, and because once hospital rates reach a critical level, it may be too late.

The Local will be following the president's speech here.