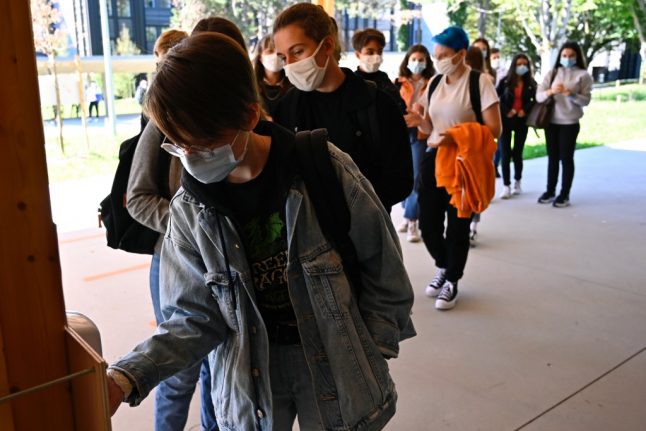 The government is considering its options to slow down the rate of infections, but it’s not yet clear how drastic the new measures, expected to be announced in the next few days, will be.

“I'm sick of the coronavirus,” Interior Minister Gérald Darmanin told France Inter on Thursday. But in the coming days, “we must expect tough decisions to be taken.”

Antoine Flahault, Director of the Institute for Global Health at the University of Geneva, which monitors the development of Covid-19 in the world, said a “total lockdown” is on the cards. In an interview with French broadcaster BFMTV, he also said that “schools represent a major risk,” and advised secondary schools and universities not to reopen after the Toussaint holidays, which end on November 2nd.

Primary schools, however, could stay open but should impose mask-wearing on children over the age of six, he said. The current rules only require children over 11 to wear them.

A study published by The Lancet on October 22nd showed that closing schools is one of the most efficient measures in slowing down the rate of infections.

However, preventing children from attending school put a huge strain on parents who had to work from home while homeschooling and taking care of their families.

The government has repeatedly stressed that the economic and psychological impact of the two months of near-total confinement in the spring was too heavy for such measures to be re-introduced.

While some epidemiologists are calling for schools to remain closed after the holidays, teachers argue that the lockdown showed that home schooling simply “didn’t work”.

“We are calling for the maintenance of in-person lessons,” Bruno Bobkiewicz of the union of national school directors’ union (SNDPEN), told BFMTV, despite recognising an acceleration in the number of positive cases in schools.

“Gaps widened between students who were able to follow the lessons from those and those who couldn't,” he said.

When President Emmanuel Macron laid out the government's strategy to return all children to the classroom in September, he said that “in the life of a child, staying at home for two months is traumatising.”

For Bobkiewicz, who teaches in Seine-Saint-Denis, school closures could have devastating long term effects. “It means children will no longer have their school meals, parents will have to stay at home and won't be able to work. It will inevitably have a negative economic impact on families.”

Keeping the country's children in school was echoed in the government's change in strategy for limiting the spread of the virus after the start of the semester in the autumn.

In the early days of September, any establishments that reported having identified cases of the virus closed down nearly immediately, but now, schools or individual classes only close in the event of a cluster inside their premises.

“It is out of the question that we send all children home, or even close entire schools at the first alarm,” Health Minister Olivier Véran said when he announced the strategy switch on September 23rd.

But with the number of infections now spiralling out of control, the second wave demands tougher measures. Jean-Rémi Girard, the president of the union of secondary and higher education establishments (SNALC) laments the government not being open to other options.

“We have been warning the ministry for a month,” he told BFTV. He argues that more preventive measures, such reducing class sizes, should have been introduced earlier. “We could have avoided the more drastic measures we are inevitably going to end up introducing again.”