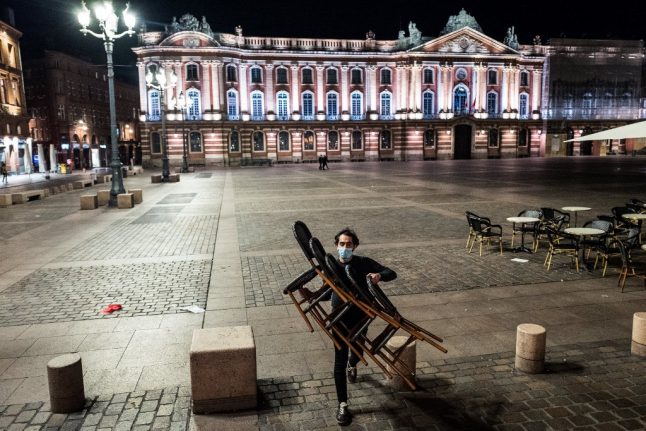 An employee takes a pile of chairs inside a closing bar on the place du Capitole, in Toulouse southwestern France, on October 24th, 2020 at the start of a curfew put in place to fight against the spre

France has seen the numbers of Covid-19 cases, hospital patients and critically ill spiral these past weeks.

“The situation is very difficult, even critical,” said Jean-François Delfraissy, President of the Scientific Council set up to advise the government on their Covid-19 policies.

“We knew there would be a second wave, but we have been shocked by the brutality of what's happened in the last 10 to 15 days,” Delfraissy told RTL radio in an interview where he outlined possible steps the government could take to curb the spread of the virus.

ANALYSIS: Can France no longer avoid a second nationwide lockdown?

“The faster we take measures, the faster they will be efficient,” Delfraissy said.

While the Scientific Council does not decide the government's politics they have a lot of clout, and since the beginning of the pandemic President Emmanuel Macron has listened attentively to their advice.

“We have to prepare for difficult decisions,” Interior Minister Gérald Darmanin told French media on Tuesday.

“At some point we have to make hard choices… as our neighbours have,” he said, referring to tough new measures announced for Italy, Spain and elsewhere in Europe.

President Emmanuel Macron is hosting emergency on Tuesday and Wednesday to thrash out a strategy for the coming weeks.

These are the main options they will be considering.

The first option is a total, nationwide lockdown such as the one France imposed in March. Back then, the whole country was confined to their homes and only allowed out for short periods to run essential errands such as grocery shopping, medical appointments and walking the dog.

French political commentators say this is the least likely scenario because of the high economic and psychological costs that would entail.

“I think that Macron is desperate to avoid another complete lockdown – for economic reasons but also for reasons of public order. A second “confinement” would be resisted much more widely than the first,” The Local's political commentator John Lichfield said.

Delfraissy said the main goals of the government was to protect France's elderly and vulnerable and maintain economic activity, while at the same time reducing the spread of the virus.

If the government were to impose a new lockdown, it would likely be adapted to the lessons drawn from this spring, avoiding to close down parts of society where the health gains were small compared to the economic and social costs – such as primary schools.

“It would probably allow for a certain level of educational activity and a certain number of economic activity,” Delfraissy said, adding that this kind of lockdown “could be set in place for a shorter period of time if it were to be introduced now.”

He also said this kind of lockdown would likely be followed by a period of curfew such as the one in place now. Members of the French National police, CRS, check the form of of a woman in Toulouse wo was out after curfew hours. Photo: AFP

Another option is to continue the government's strategy to adapt measures to local conditions and introduce lockdowns in the country's hardest hit areas.

This would target areas with high levels of spread and areas where hospital struggle to cope with the pressure of new Covid-19 patients, such as Paris, Marseille and Lyon.

“I'd rather have local lockdowns now than a nationwide lockdown at Christmas,” Damien Abad, parliament chief for the rightwing opposition Les Republicains, told France Info radio.

The third option would be a lighter and adapted version of lockdown, which could include measures such as a weekend confinement and an earlier curfew than the 9pm curfew currently in place in roughly half of the country.

“This would be much tougher than the curfew currently in place,” Delfraissy said about that option.

Such a strategy has received support from a group of doctors in Lyon, who called for a 7pm curfew and a weekend lockdown.

“The situation is serious and we cannot afford to take half-measures any longer,” they said in a press statement.

This strategy could also entail closing secondary schools, high schools and universities, such as suggested by Antoine Flahault, Director of the Institute for Global Health at the University of Geneva, which monitors the development of Covid-19 in the world.

“We already have taken lockdown measures, they might be sufficient,” he told French media.

“I don't think schools should reopen after the Toussaint holidays,” he said, adding that primary schools could keep open under stricter health rules such as introducing compulsory mask-wearing for children over six years old.

Jean Rottner, Head of the region Grand Est – the first French region to see hospitals overwhelmed with patients this spring – also has voiced support for such an alternative.

In a tweet he said he was “certain that we are headed towards a lockdown”, and proposed a list of even stricter measures to curb the spread – including limiting travel, more remote working and reserving public transport for professional purposes.

Time is running out

While there is still more unknowns than knowns about what lies ahead for France, one thing is certain: the government will need to decide quickly.

Macron is under pressure from hospitals and academics, several of whom are calling for swift and radical measures.

“Failing to do so would guarantee that we run straight into the wall,” she said.

Infectious disease specialist Gilles Pialoux at Paris's Tenon hospital urged the government to adopt “a drastic measure, call it a lockdown” for the entire country, despite the economic toll.

“The economy can bounce back, but you don't bounce if intensive care fails,” he told French media.