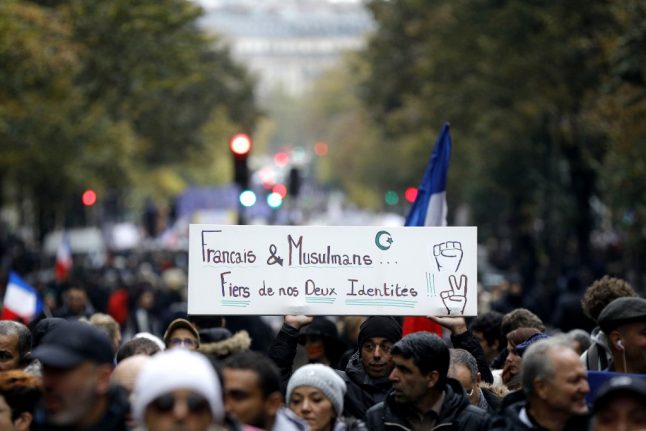 Protesters hold a placard reading "French and muslims, proud of our identities" as they march in Paris to protest against Islamophobia, on November 10, 2019. Photo: AFP

“With every attack it’s the same, every time there’s a problem Muslims are immediately stigmatised,” said Julien, a 27-year-old Muslim.

Julien was on his coffee break in a café on Boulevard Voltaire in the centre of Paris on Monday morning when The Local approached him to ask what he thought about the government's response to the brutal terror attack in one of the capital's suburbs a couple of weeks earlier.

The beheading of Samuel Paty, a 47-year-old history teacher, took place near the middle school where he had shown his class Charlie Hebdo cartoons of the Prophet Muhammed as part of a lesson on free speech.

The sickening attack came just days after President Emmanuel Macron had announced measures to tackle what he called “Islamist separatism” in a long-awaited declaration on October 2nd, aimed at defending secular values and reforming Islam in France. The measures included control over foreign funding of mosques, plans to end a programme that allows foreign countries to send imams and teachers to France, and stricter oversight of schooling.

After the attack, the government also launched a series of sting operations directed at individuals and institutions considered as proponents of radical Islam. A mosque in Pantin, a northern Paris suburb, was temporarily closed. The government last week said more than 50 Muslim associations could be dissolved if found to be promoting hatred.

Perhaps what has hurt ordinary Muslims most in recent days were the words of certain ministers, politicians and even president Macron himself.

The country's interior minister spoke out against halal and other ethnic food sections in supermarkets, Macron said France would never give up caricatures of Mohammed and far-right Marine Le Pen has inevitably been emboldened and has demanded the Muslim headscarf be banned in all public places in France – a measure that may even gain support from France's education minister, who has previously said the garment was “not desirable in French society”. A portrait of French teacher Samuel Paty is projected along with cartoons of French satirical weekly newspaper Charlie Hebdo onto the facade of the Hotel de Region in Montpellier, on October 21st, 2020, during a national homage to the teacher. Photo: AFP

“There have been a lot of quick reactions and decisions that have been badly received by Muslims,” said Hania, a 27 year-old Muslim and student from Strasbourg.

“The condemnation of the attack was unanimous, but in the aftermath, for almost a week, we were in a frenzy and fundamental rights were put into question: the right to worship, freedom of expression, and even the right to assembly.”

“There is a lot of work to do because we see it in every tragic event: we enter this vicious cycle, and every time it intensifies,” said Hania. “But this cycle is detrimental to everyone's freedoms, and it’s clearly detrimental to the unity of the country.”

France has the largest Muslim population in Western Europe – estimated to be between five and six million. The state's relationship with Islam has long been fraught with rows regularly flaring up over the years whether over the banning of headscarves in schools, burqas in public places or burkinis on beaches.

Some have accused Macron of trying to repress Islam in France, and said the crackdown on what the government says is radical Islamism could be counter productive and fuel anti-Muslim sentiment.

Taha Bouhafs, a journalist and anti-racism activist who has covered police violence and racism in France for years, has called for the government to rather fight discrimination of Muslims in France.

“Caricatures could be hurtful,” he tweeted, “but the real question is the one of Muslim's civil and social rights in France and of the organised discrimination by one part of the media and political class.”

Sofia, 50, a Muslim who was out for a walk by the Canal Saint-Martin with her daughter, said she fears more stigmatisation and being further marginalised in French society in the wake of the attack.

“People look at us, they put us all in the same category. But we’re not hurting anyone. The media play a part in that too,” she said.

“We live in anxiety, Muslims are not murderers, we respect others. The person who did this is not a Muslim.

“We want to live like everybody else, we are French,” she said.

She also worried that this was distracting from the pandemic, which she said should be a priority right now.

“We need to focus on Covid, we are stressed out about it. It’s not good,” Sofia said. Some younger Muslims however, seem to be growing tired of the same debate every time there is a terrorist attack.

“It's the same every time,” said Mamadou, 23, a delivery driver. “But it doesn't affect me personally. I've been too busy working the past few days to pay much attention to it.”

His colleague, Sidy, 22, says he doesn't feel personally attacked either.

“It doesn't affect me, I don't care,” he said. While he defended the right to publish cartoons such as those found in the satirical magazine Charlie Hebdo, he said the magazine often unfairly targeted Muslims: “I think the majority of Muslims take it personally. It's a provocation.”

France’s laïcité, loosely translated as state secularism, is based on the separation of church and state, and aims to give citizens the freedom to belong to any faith of their choosing, but outward displays of religious affiliation are not allowed in schools or the public service.

“Secularism is the cement of a united France,” Macron said in his speech on October 2nd.

“Let us not fall into the trap laid by (…) extremists, who aim to stigmatise all Muslims.”

Since 1978, French law has also prohibited the collection of any data based on race, religion or ethnicity. Something that some argue serves to make minorities, and the difficulties they face, invisible.

Islamophobia is built deep into the institutions of French government:

This is structural Islamophobia. #France

In a piece in Le Monde published on October 20th, Gilles Kepel, a famous French scholar of Islam, said: “The law against separatism must deal with the causes and not just the consequences.” Protesters march in Paris to raise awareness of Islamophobia in France, on November 10th, 2019. Phoo: AFP

Meanwhile the French Council of the Muslim Faith (CFCM), which acts as an official intermediary between the state and observant Muslims, said that Muslims “are not persecuted” in France, in a letter sent to Imams on Thursday for them to include in their service if they wished.

“France is a great country, Muslim citizens are not persecuted, they freely construct their mosques and they freely practise their religion,” said the council, which acts as an official go-between for the state and observant Muslims.

The head of the CFCM, Mohammed Moussaoui, urged French Muslims on Monday to “defend the interests” of the nation in the face of the international outcry.

“We know that the promoters of these campaigns say they defend Islam and the Muslims of France, we urge them to be reasonable… all the smear campaigns against France are counterproductive and create division,” he said.

Regarding cartoons of the Prophet Mohamed,  viewed as offensive by many Muslims, Moussaoui said French law gave people “the right to hate” the cartoons.

But he said he supported the stance of Macron, who has vowed France would never relinquish cartoons or the right to mock religion.

Representatives of the CFCM met with Macron at the Elysée Palace Monday. The government has fiercely defended its strategy, with Macron calling Samuel Paty a “silent hero” who promoted the French values of free speech on a grassroots level through his work as a teacher. Paty's memory, the government line goes, must be honoured by cracking down on those seeking to repress freedom of expression in France.

But French teachers, those set to continue the work of Paty, have expressed concern that the government might be making their job more difficult rather than easier, particularly in the suburbs of Paris which is home to a large Muslim population.

Héloïse Barquet, a teacher at the Académie de Créteil, on the outskirts of Paris, said she worried about the impact the terrorist attack has had on her Muslim pupils and the stigmatisation they might be vulnerable to when they return to school on Monday November 2nd after the Toussaint holidays.

“I will always remember one pupil who was in tears after the [November 2015 terror] attacks and who said to me: “Madame, I am a Muslim and it's not my fault. But they will say that it is my fault”,” she told France Inter.

“It's this student's sadness that I am thinking about, and what my colleagues and I might have to confront when children go back to school after the holidays.”