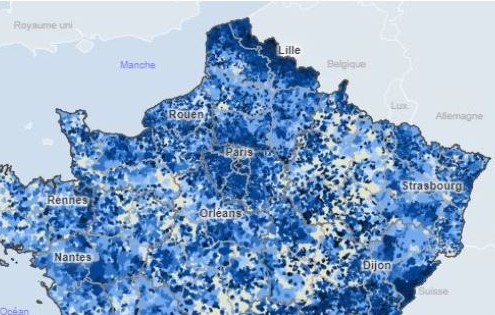 On Sunday October 25th France recorded a new grim record of over 52,000 positive Covid-19 infections in just one day.

It was confirmation, if it was even needed, that the infection rate in France had rocketed in recent weeks and forced the government to consider new restrictions and perhaps even a return to confinement.

The explosion of the second wave has taken the government and health chiefs by surprise. The speed at which the epidemic has made a resurgence can be seen in detailed maps.

Since the final week of September, Santé Publique France has published an interactive map that shows the Covid-19 infection rate in each of France's 35,014 municipalities.
The incidence or infection rate corresponds to the number of confirmed new Covid-19 cases per 100,000 inhabitants over the preceding seven days.
Late September, between the 24th and 30th that month, the situation in France looked like this: Back then, most areas were coloured white, which meant they had registered incidents rates below 10, which is low enough for them not to be considered at high risk for Covid-19 spread.

Towns and cities coloured light blue had an incidence rate between 10 and 20, which is not seen as alarming either, but a warning sign that the virus is spreading with increased pace.

The slightly darker blue tone refers to incident rates between 20 and 50, while mid blue means between 50 and 150, and the near-darkest blue tone between 150 and 250.

Areas coloured dark blue on the map had an incidence rate above 250, which is one of the thresholds the government has set for an area to tip into maximum alert level, which leads to new restrictions and a 9pm evening curfew.

One week later, between October 1st and October 7th, the dark blue areas had expanded. One week after that, between October 8th and October 14th, this was the situation: Between October 15th and October 21st a lot more of the country had turned dark blue. The newest version of the map is based on data between October 22nd and October 26th, and has few white spots left.

France on October 26th counted 17,761 Covid-19 hospital patients, a number that has soared over the same time period as the one shown in the map, and is growing with increasingly rapid pace.

The graphic below shows the development of the total number of hospital patients in France since late March. These numbers are especially worrying because hospital admissions and intensive care admissions do not increase simultaneously.

“When hospital numbers increase, we know that this leads to an increase in intensive care admissions within 15 days,” virologist Catherine Hill told French media.

Intensive care rates best indicate the gravity of the Covid-19 situation in the country, because they are the last ones to rise before deaths. France also has a limited number of intensive care beds (5,800 in total, up from 5,100 in March).

Hill is one of several academics who has said he government must take drastic measures urgently to reverse the trend before it's too late.

“It is extremely urgent to confine the country. Failing to do so would guarantee that we run straight into the wall,” she said.