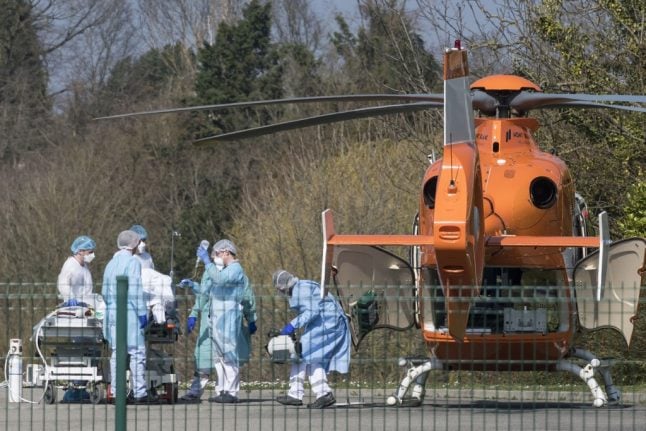 This spring, France shipped Covid-19 patients from one region to another in order to alleviate pressure on hospitals. Photo: AFP

Since the easing of the first lockdown in May, the French government has repeatedly stressed that the economic and psychological impact of the two months of near-total confinement was too heavy for such drastic measures to be re-introduced.

But as the country’s virus rates continue to spiral, several hospitals in hard-hit areas of the country have sounded the alarm that their establishments are in danger of being overloaded with new patients and asked that the government take tougher measures.

Jean-François Delfraissy, President of the Scientific Council set up to advise the government on their Covid-19 policies said on Tuesday the situation was “critical”.

“We knew there would be a second wave, but we have been shocked by the brutality of what's happened in the last 10 to 15 days,” he said.

In a sign that things are worsening rapidly, President Emmanuel Macron announced he would two security council meetings in the coming days with his ministers and that the PM Jean Castex would also meet the leaders of other political parties.

Naturally thoughts are turning to the chances of a new confinement, which back in March saw people in France forced to stay home for two months.

“I don’t think we have a choice anymore. We must re-confine,” said Eric Caumes, Head of the Infectious Diseases Department at the Pitié-Salpêtrière hospital in Paris on Monday, the morning after France set yet another grim Covid-19 record with more than 52,000 new positives in one day.

“It is necessary to re-confine to reorganise, to stop this saturation of the hospital system, especially in intensive care units,” Caumes told French media, urging the government to act swiftly.

“The later we wait to make the right decisions, the less quickly they will have an effect,” Caumes said.

Pitié-Salpêtrière is one of several French hospitals that once again find themselves strained after the Paris region has reported that Covid-19 patients now occupy 67 percent of their intensive care capacity and could reach 90 percent before the end of the month.

Intensive care rates best indicate the gravity of the Covid-19 situation in the country, because they are the last figure to rise before deaths and highlights the impact of the epidemic on hospitals and the overall health system.
France has reported over 200 new admissions into intensive care units per day the past week. On Saturday the country counted 2,491 Covid-19 patients in its intensive wards, much less than during the peak of the first wave of infections in early April (7,019 patients on April 9th), but more than enough for hospitals to worry about the weeks to come as numbers rise exponentially.

Half of the country under curfew

France has 5,800 intensive care beds in total (up from 5,100 in March), and the health minister said during a press conference last week they can increase this number to 7,700 within 15 days “without major organisational effort”.

At that same press conference, Prime Minister Jean Castex for the first time mentioned the possibility of introducing a new, nationwide lockdown, if the situation did not improve quickly.

“If we do not collectively succeed in curbing the epidemic, we will have to take tougher measures,” Castex said.

Previously the prime minister had said that the only lockdowns the government would consider were localised ones that targeted the areas suffering the most from the virus.

But that was back when the general understanding was that the hardest battles against virus would be fought in the country's densely populated cities, not in France at large.

This weekend, the government added an additional 38 départments to the list of areas on under curfew, bringing the total number up to 54 out of 96 mainland départements – roughly half of the country.

MAP: Which areas in France are under curfew?

“I don't know if it will be possible to avoid a re-confinement, I'm not very optimistic.”

Costagliola was referring to the time lag between when political measures enter into effect and their impact on hospital rates, which explains why hospital admission rates and intensive care rates have continued to increase with increasingly rapid pace even after the curfew entered into effect in Paris and eight other French cities on October 16th.

'Macron is desperate to avoid another lockdown'

The government, health authorities and indeed the French public are waiting in hope to see the impact of the curfew on infection rates, but for now the numbers are only rising.

“The most worrying fact is that the number of new cases continues to explode despite the curfews imposed on most big city areas more than a week ago,” said The Local's political commentator John Lichfield.

France's positivity test rate is higher than ever, up to 17 percent of tests now come back positive compared to 4.5 percent early September. While some of this is due to a strategy swap where the government has urged only those considered as contact cases or those with symptoms to get tested, Lichfield said the numbers remained too high and will weigh heavy on the minds of ministers.

“If those numbers don’t start to come down this week, the government will feel obliged – by its own logic – to do something more drastic,” he said.

In terms of the number of Covid-19 patients dying the situation is not as extreme as back in April. France's daily death toll has been on a level of around 150 per day, compared to over 500 per day in early April and occasionally topped 1,000 on some days.

“The other stats – deaths and acute cases – are also beginning to accelerate but remain far, far below the levels seen in the spring.

“For example, there were 17,000 Covid19 deaths in the for weeks to mid April but there have been “only” 4,000 new deaths in the eight or so weeks since the second wave began in early September.

“I think that Macron is desperate to avoid another complete lockdown – for economic reasons but also for reasons of public order. A second “confinement” would be resisted much more widely than the first,” Lichfield said.

For his part, the head of France's Scientific Council Delfraissy suggested two possible ways to curb the spread: Either a much stricter and longer nationwide curfew or a lockdown.

Some have suggested alternative versions of lockdown, including a group of doctors in Lyon who have called on a weekend lockdown and a curfew beginning at 7pm instead of 9pm the rest of the week.

Jean Rottner, Head of the region Grand Est – the first French region to see hospitals overwhelmed with patients this spring – said in a tweet that he was “certain that we are headed towards a lockdown”, and proposed a list of even stricter measures to curb the spread – including limiting travel, more remote working and reserving public transport for professional purposes.

Antoine Flahault, Director of the Institute for Global Health at the University of Geneva, which monitors the development of Covid-19 in the world, warned against reopening secondary schools, high schools and universities after the autumn break.

“Primary schools could remain open but should impose the wearing of masks, even for children over 6 years old,” he told French media.

What is almost certain is that there will be further measures, whether nationwide or in certain hard-hit areas.

President Emmanuel Macron has used Twitter to urge the French public to take responsibility to help stop the spread of the virus.

“Giving up a dinner party or a weekend with friends isn't going to please anyone. But that it is temporary. To restrict yourself now is to be able to hope to find yourself again soon. As long as we all play the game,” Macron said.