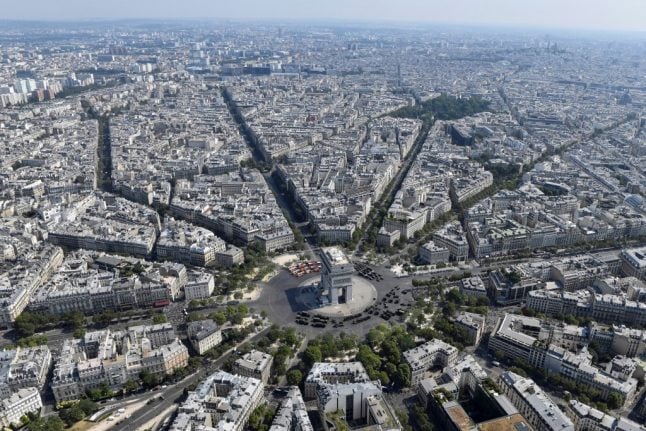 Paris may be getting greener than this. Photo: AFP

Deputy Mayor Christophe Najdovski, who is in charge of the city's green politics, called the plan an “urban revolution”.

“There will be parks developed as part of all major urban projects to come,” he told French daily Le Parisien, in an interview where he revealed details of the new project.

Paris already contains some 500,000 trees in total, split between its woods, parks and cemeteries, but the city wants to widen its green spaces “to adapt to climate change and improve quality of life Parisians,” Najdovski said in a tweet.

The project will include: Parisians rest in the park outside of Palace Royal in Paris. Photo: AFP

Since Anne Hidalgo was elected for the first time in 2014, the Socialist Party mayor has striven to make the French capital more environment friendly, by expanding green areas and bike lanes, and improving the public city bike system.

She was reelected earlier in 2020 on a platform of continuing this work, in partnership with the Green party.

“Turning Paris into a green city is a necessary answer to climate imbalance, to the biodiversity crisis, and it's also a way to improve our living environment,” Hidalgo said in a letter seen by Le Parisien.

There is no set end-date for the project, but the mayor has vowed to make turning the city greener a “priority axis” for her mandate, which runs until 2026.

Hidalgo’s objective is to turn 40 percent of the capital's spaces into green areas by 2040. However, that rests on her being reelected more then once between here and then.

Last week saw scorching temperatures but for most of the country these fell over the long weekend, and many areas saw some very welcome rain.

However on Tuesday several areas are on orange alert for storms.

Five départements in the south of France – Aveyron, Tarn, Aude, Hérault and Gard – are on orange alert for violent storms, which are forecast to hit in the afternoon.

Flash flooding is possible, especially in the Languedoc area where up to 40mm of rain is predicted to fall in less than an hour, accompanied by 100km/h winds.

The rest of the country is on yellow warning for rainstorms, and flash-flooding could be seen in other areas.

The combination of parched ground after weeks of drought and the sudden, intense downpours creates the perfect condition for localised flooding.

Temperatures have fallen about 10C since the weekend, and will be between 15C and 20C for most of the country.

Although the high winds are predicted to have blown themselves out, storms are forecast for much of the country with thunder and heavy rain.

Temperatures will remain a cool 15C-20C.

Although rain remains likely in the north and east of the country the storms are set to be finished and sunny weather and warm temperatures return to the south.

All along the Mediterranean coast will be sunny all day with temperatures reaching 29C.

A little rain and cloud are likely in the north and centre of the country, but largely the weather is predicted to be fine and sunny with temperatures ranging from 20C-25C in the north and 25C-29C in the south.

Unfortunately meteorologists predict that the storms will do little to help France’s drought, as much of the water from sudden storms is likely to run off the parched land, rather than soak in.

Water restrictions remain in place across almost all of France and experts say the water table is unlikely to be fully replenished until late September or early October.