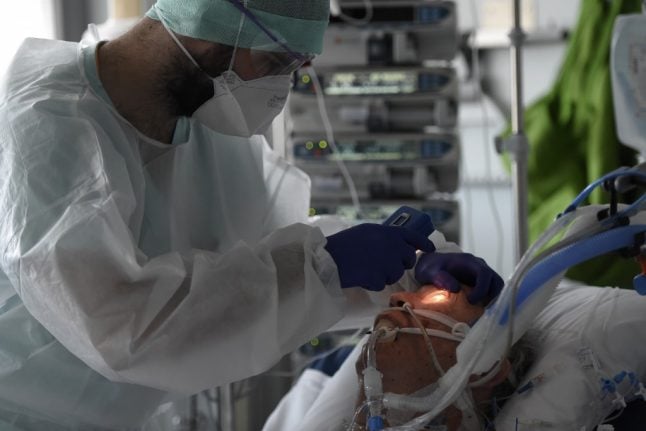 The French Prime Minister Jean Castex earlier on Thursday evening announced that the 9pm curfew would be extended to cover a total of 54 départements – roughly half the country.

Around 46 million people will be living under curfew by Saturday.

France is now testing around 1.3 million people a week with its expanded testing programme, but the percentage of people testing positive for the virus showed another alarming lurch upwards, now standing at 14.3 percent.

The situation in the country's hospitals is also giving cause for concern, with 10,166 people now in hospital with the virus, 1,672 of whom are sick enough to require intensive care.

Medics in several regions, including Paris, have sounded the alarm about intensive care occupancy, which has been growing rapidly in recent days.

Earlier on Thursday public health agency Santé Publique France published a series of maps showing where in the country the virus is spreading quickest.

READ ALSO MAP Where in France is Covid-19 spreading fastest?

In total 7,588 towns and cities are now recording an incidence rate of more than 250 cases per 100,000. The national incidence rate is 251.1, albeit with large regional variations between rural and sparsely populated areas such as Corrèze and Lozère, which are still reporting few cases, and the big cities on 'maximum alert' level.

A record seems to have been set in Roubaix, one of France's poorest towns located in the north of the country close to Lille, which reported an incidence rate of 1,135 on Tuesday – more than four times the national average. Sometimes lags in the collection of data leads to a sudden rise in numbers, so spikes like these must always be interpreted with caution.

Generally speaking, however, the situation has been deteriorating in Roubaix lately and the city has recorded 33 Covid-19 fatalities in October.