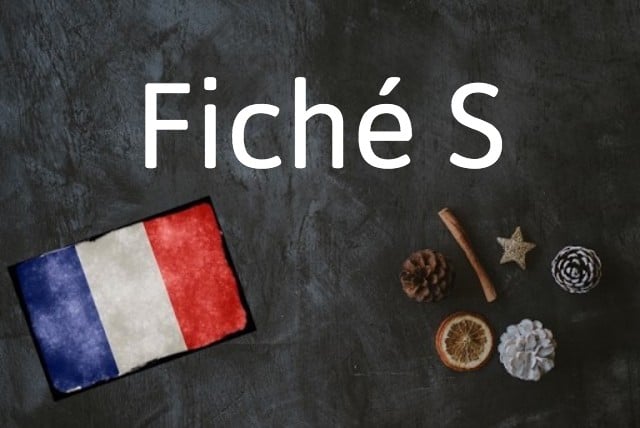 Why do I need to know fiché S ?

Because you're likely to see this piece of official police jargon in a lot of news headlines, as well as hear it in everyday conversation, at present.

In France, a fiche S is part of a national database called the Fichier des Personnes Recherchées (FPR), which is a database of wanted criminals or people on watchlists that was created in 1969.

This database also contains details of escaped prisoners (letter V), people who have escaped from institutions (AL) or people barred from entering the country (IT).

The letter S stands for 'state security' and there are different types of fiches S, with numbers going from S1 to S16 so when someone is described as fiché S, it means that they are suspected of being a threat to state security.

Fiché S is, however, not in itself a cause for arrest.

Around 70 percent of fiches S are made by the French interior security general direction (DGSI), which is the national intelligence service.

You will most commonly hear the term in relation to terrorists, such as when French police raided the homes of dozens of fichés S after the terror attack in Conflans in which a teacher was beheaded.

However not all fiché S are terrorists – football hooligans can be fichés S. It is the same for some radical environmental activists, even if they are non-violent.

In total, France currently counts some 22,000 fichés S, of which 8,000 are fichés for radicalisation, the French interior minister said last week.

A fiche S is kept for two years in the Fichier des Personnes Recherchées and is destroyed if the person has kept a low profile. Otherwise, the fiche S is renewed.

Fiche S refers to the file, while fiché S is the person who is the subject of the file.

Although it's obviously a serious subject, the term has become so ubiquitous in everyday life that some people even use it as a joke. So for example if you declare a particularly controversial opinion – a salade Niçoise is actually better with potatoes in it, let's say – your friend might say Ooooh, tu es fiché S ! –  You're on the watchlist now!

Or as in the tweet below “Damn, I don't like cassoulet – that's me going on the watchlist.”

Le terroriste arrêté est fiché S depuis quelques années – The arrested terrorist had been on a watchlist for several years.