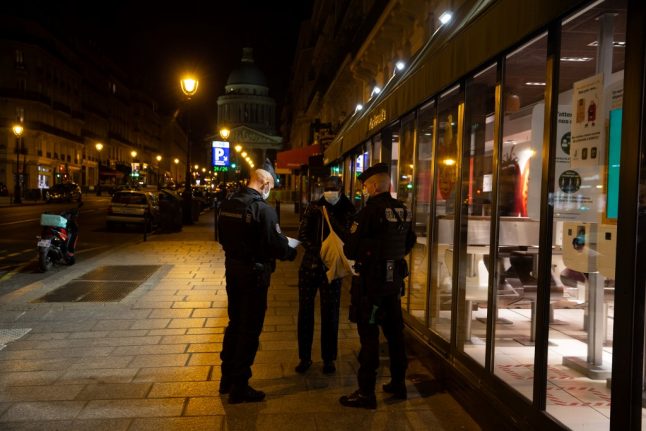 Gérald Darmanin presented the numbers on Monday, saying they proved that “the police and the gendarmerie are present” to ensure that the curfew is respected.

The curfew entered into effect on Saturday, and was imposed by the French government in a bid to slow down the spiralling Covid-19 rates in Paris and the eight other cities concerned.

For at least four weeks, some 20 million inhabitants of nine French cities under curfew must stay inside their homes between 9pm and 6pm, unless they have a valid reason to be outside (such as work, medical errands or other exceptions listed here).

READ ALSO  What are the rules of France's new nighttime curfew?

Darmanin told the TV channel TF1 that the checks issued so far had shown that the inhabitants in the French cities concerned largely respected the rules.

“The French are paying attention to health situation like the President wanted,” Darmanin said.

“In its near entirety, this curfew is respected,” he said, specifying that the checks and fines included both individuals and establishments.

Restaurants, cinemas and other businesses must also close down at 9pm, with the exception of some takeaway services.

Anyone who does not respect the curfew risks a fine of €135, which can go up to €3,750 and six months in prison for repeat offenders.

France on Monday reported another spike in Covid-19 numbers, with hospital intensive care units exceeding more than 2,000 Covid-19 patients for the first time since May.

Hospitals in the Paris region said Covid-19 patients now filled over 50 percent of their total capacity.
The hope is that the curfew will slow down what health authorities said to be “too quickly” rising numbers.