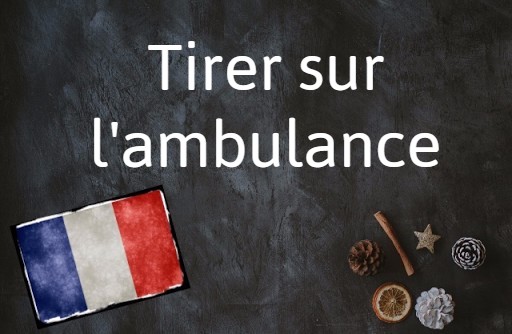 Why do I need to know tirer sur l’ambulance?

Because it's not as threatening as it sounds, but it's a good way to get started with French cynicism.

Literally translated as, ‘to shoot at an ambulance’, this expression is less dramatic than it sounds.

Ambulances are used to transport injured people, so shooting at one of these vehicles is obviously not a nice thing to do, and it's also a surefire way to cause even more damage than has already been done.

The French say tirer sur l’ambulance in a figurative sense to say that someone is having a go at someone else who is already in a weak position.

An English equivalent would be to 'kick someone when they are down'.

The expression is quite recent and was used for the first time in 1974, as the title of an article written by the politician Françoise Giroud. Giroud kickstarted a trend, and soon politicians were using the expression left and right.

Today, tirer sur l’ambulance is widely used, and not just by politicians.

Typically, someone is figuratively shooting at the ambulance when they know that they are in a superior position and use this power in a mean way to exploit the other's weakness.

Say you're family is discussing where to go on holiday next, and mum immediately shoots down dad's idea as a horrible plan, before then going onto complain about how dad never really has any good plans, you could say:

La vie a été dure avec eux, inutile de tirer sur l’ambulance – Life has been tough for them, there is no need to kick someone when they are down.

Aide-la, au lieu de tirer sur l’ambulance ! – You should help her, instead of making things worse!

Il est vraiment trop facile de tirer sur l’ambulance – It's just too easy to kick someone when they're already down.

S’acharner sur quelqu’un – To set upon somebody

Accabler quelqu’un – To overburden somebody