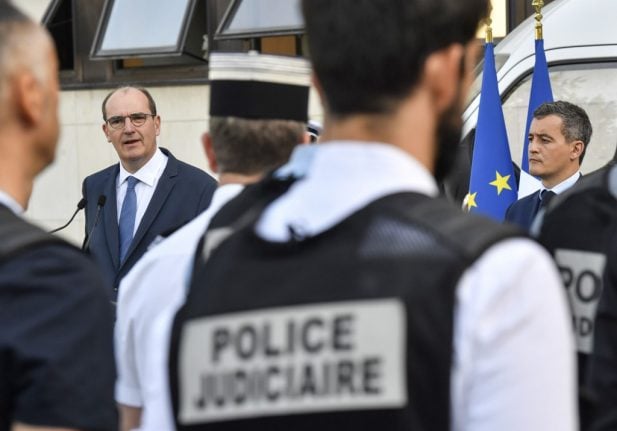 French Prime Minister Jean Castex and Interior Minister Gérald Darmanin both have vowed strong action from the French state to clamp down on radical islamists following the attack. Photo: AFP

Gérald Darmanin said the swoop on Islamist networks was designed to send a message that “enemies of the Republic” would not enjoy “a minute's respite”.

He said over 80 investigations had been launched for online hate speech following the attack, which has drawn parallels with the 2015 massacre at the Charlie Hebdo satirical magazine, where 12 people were gunned down for publishing the Mohammed cartoons.

The raids came a day after tens of thousands of people took part in rallies countrywide to honour slain history teacher Samuel Paty and to defend freedom of expression.

Police have detained 11 people over Friday's attack near the school where 47-year-old Paty taught in Conflans-Saint-Honorine, a usually quiet suburb around 30 kilometres northwest of central Paris.

IN PICTURES: Thousands rally across France in solidarity after beheading of teacher

The assailant, an 18-year-old of Chechen origin, was shot by police and later died of his injuries.

At the beginning of October, Paty taught a class on freedom of expression for which he showed pupils caricatures of the prophet Mohammed.

READ ALSO The Mohammed cartoon beheading: what we know so far

Police are investigating the role of a father of a schoolgirl and a known Islamist militant currently held by police, who posted a video on social media where he called for a dismissal of Paty for showing the cartoons.

“They apparently launched a fatwa against the teacher,” minister Darmanin told Europe 1 radio of the two men, who are among those being held over the attack.