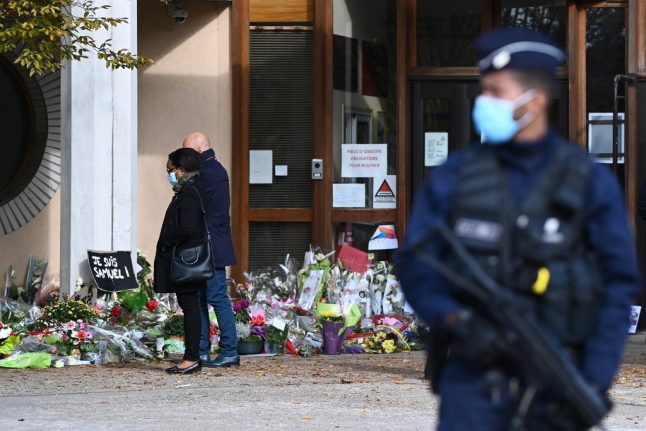 Police guard a flower memorial outside the secondary school where Samuel Paty taught, in in Conflans-Sainte-Honorine, northwest of Paris. Photo: AFP

They were among 15 people being held over the incident, one of whom was previously convicted for terror related crimes and admitted to having had contact with the man who killed Samuel Paty for showing a cartoon of the Prophet Mohammed to his class, the source told AFP.

Paty was “pointed out” to his attacker “by one or more pupils, probably in return for payment”, according to the source.

READ MORE The Mohammed cartoon beheading: what we know so far

The killer's parents, grandfather and younger brother, detained over the weekend, remain in custody.

Those in custody also included a known Islamist radical as well as the father of one of Paty's pupils who had launched an online campaign against the teacher.

One other person was being held on suspicion of driving the killer, and another for allegedly accompanying him during the purchase of one of his weapons.

French Interior Minister Gérald Dermanain on Monday said over 80 investigations had been launched for online hate speech following the attack.

The attack on Paty has drawn parallels with the 2015 massacre at the Charlie Hebdo satirical magazine, where 12 people were gunned down for publishing the Mohammed cartoons.