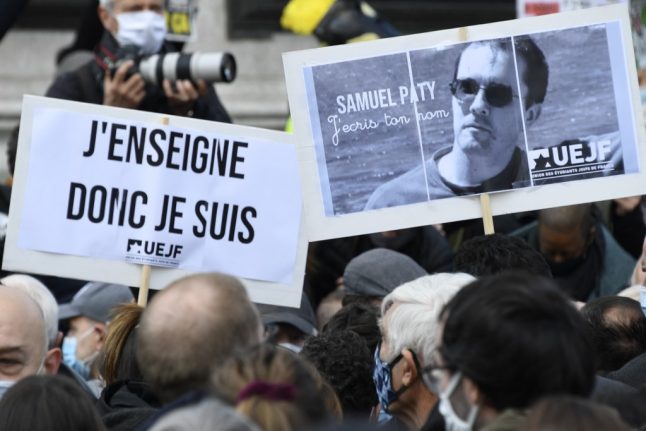 A placard reading "I teach so I am" and a portrait of history teacher Samuel Paty in the crowd of thousands of people who gathered on Place de la Republique in Paris on October 18th, two days after he

Who was the victim?

The teacher was Samuel Paty, 47, who taught history and geography in the quiet suburb of Conflans-Sainte-Honorine, about 20km outside Paris, and was on his way home from school when he was attacked.

At the beginning of October, he taught a class on freedom of expression during which he showed pupils caricatures of the Prophet Mohammed.

The killing has drawn parallels with the 2015 massacre at Charlie Hebdo satirical magazine, where 12 people, including cartoonists, were gunned down for publishing cartoons of Mohammed.

Teachers and pupils have praised his skills as a teacher.

A silent rally to mourn Paty, who had a five-year-old son, took place in his hometown on Tuesday evening.

President Emmanuel Macron will attend national memorial on Wednesday at the Sorbonne University in Paris, where Paty will be awarded the Legion d'honneur posthumously.

Who was the perpetrator?

Paty's killer Abdullakh Anzorov, who was shot and fatally injured by police after the incident, was an 18-year-old born in Moscow, originally from Russia's southern and largely Muslim-dominated region of Chechnya.

Anzorov arrived in France with his family more than a decade ago.

According to anti-terror prosecutor Jean-Francois Ricard, he had been granted refugee status in France and received a 10-year residency permit earlier this year.

Anzorov was not known to the intelligence services and had no convictions but had been in trouble for inflicting damage on public property and violence while still a minor, Ricard told French media during a press conference on Saturday.

Why was the teacher targeted?
Anzorov did not go to the school where Paty taught and investigators are currently trying to establish why an 18-year-old would travel some 80 kilometres from his home in Normandy to hunt down a man with whom he currently seemed to have no prior connection.

According to Ricard, initial evidence suggests the perpetrator loitered outside the school on Friday afternoon and asked pupils where he could find Paty.

Four pupils who may have helped Anzorov to identify the teacher in return for payment were on Monday detained by the police.

According to the anti-terror prosecutor, a father of one of the pupils at the school had embarked on a campaign to have the teacher dismissed when he found out about the cartoons.

Paty warned his pupils before showing the caricatures, saying that those who might take offence and were free to look away. He did not, as previously reported, say that the pupils of Muslim faith could leave the class, according to a police report obtained by French media.

The father spoke to the headteacher of the school and published calls on social media attacking the teacher and insisting it is time to “say stop” to such behaviour, accusing Paty of showing pornographic material to his class.

The French interior minister accused the father of having, along with another known Islamist radical who is now in police custody, issued a “fatwa” against Paty, effectively putting a price on his head.

Police are investigating the role played by social media in the attack.

According to French media, Anzorov was highly active on the platform in the weeks preceding the attack, publishing more than 400 tweets, some of which included extracts from the Quran, others featuring comments on political news.

A message claiming the attack with a gruesome accompanying photo was published on a Twitter account confirmed to have belonged to Anzorov.

Who has been arrested?

By Monday, a total of 15 people had been detained for questioning, including the four children and the father who complained about the teacher's class.

Another man who took part in videos posted by the father calling for the dismissal of the teacher has also been detained, along with his wife. This man, who had accompanied the father to the school to complain about Paty, has turned out to be a known radical Islamist.

Anti-terror prosecutor Ricard said the half-sister of the father had joined Islamic State jihadists in Syria in 2014 and was already the subject of an arrest warrant.

Four of the suspect's relatives – his younger brother, grandfather and parents – were also detained for questioning.

What is the government doing more broadly?

Interior Minister Gérald Darmanin on Monday vowed there would be “not a minute's respite for enemies of the Republic,” as law enforcement carried out 40 raids, mostly around Paris, with many more planned.

Darmanin said the government would also tighten its grip on institutions and charities with suspected links to Islamist networks.

Officials named two groups they would target for closure – the Collective Against Islamophobia in France which claims to monitor attacks against Muslims and BarakaCity, which describes itself as a humanitarian organisation.

In a social media post, BarakaCity accused Darmanin of “going mad” and said he was taking advantage of a tragedy.

Darmanin also ordered the closure of a mosque in the Parisian suburb of Pantin, accusing its imam of encouraging intimidation of the teacher and publicising the address of the school.

Meanwhile Paris prosecutors said they had opened an investigation into a French neo-Nazi website hosted abroad that republished the photo of Paty's decapitated corpse posted to Twitter by the killer.