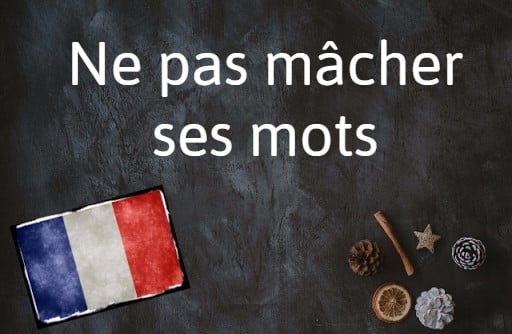 Why do I need to know ne pas mâcher ses mots ?

Because applying this expression to your life can make things clearer.

The idea behind the expression is letting the words come out of your mouth without thinking about what you want to say, which will probably result in a very frank speech.

The opposite of this expression, mâcher ses mots, is also very common. It means that you are taking the time to choose your words wisely.

For instance, adding et je mâche mes mots at the end of a sentence is a way of emphasizing your attempt at being fair and objective in your judgement.

So saying that somebody ne mâche pas ses mots means that their way of speaking is very up-front and honest, perhaps too honest. This is something of a trait in France, which you need to be aware of before asking a French person whether your bum looks big in your new trousers.

Elle lui a enfin dit la vérité, sans mâcher ses mots  – She finally told him the truth, she did not pull any punches.

Etre cash – to be direct