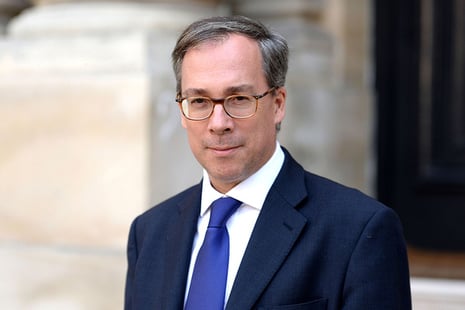 Speaking to The Local as France prepares to launch its online portal that will allow Britons living in France to apply for the right to remain after Brexit, the British Ambassador to France Ed Llewellyn has urged people not to delay their application.

He reassured the British community that the process is considerably simpler and more straightforward than the old system.

All of the 150,000 to 300,000 British people living in France will have to make a fresh application for post-Brexit residency, and have until October 1st 2021 to get their carte de séjour residency permit – although applications to the site must be made by June 30th.

“We know Emmanuel Macron has said that the British community are welcome to stay here and this is the feeling I get too talking to French ministers and officials – the contribution of British people to France and to their local communities is recognised and valued and French officials are really trying to be helpful to us on the residency system.”

The team at the British Embassy in Paris have seen the new system and say it is user-friendly – and in English.

The ambassador said: “We have had a preview of the new website, which goes live on Monday and it really is a straightforward and simple process. You fill in your details then state how long you have been in France and whether you already have a carte de séjour, and the site directs you to the relevant section.

“There is a flowchart on the site so you can find out in advance what type of supporting documents you will need for your application and you can also save applications on the site for 20 days before submitting,” he said.

“The site is in English, although if you want to add your own comments in the 'any other information/comments' section at the end it would be better to do this in French.

“The application is then passed to the préfecture where you live who will process it and invite you to an appointment to provide biometric details [fingerprints]. You will receive a receipt once you have done this and then the card will then be posted out to you.

“So the process should only involve one visit to the préfecture.”

Over the past four years many people began the process of applying for a carte de séjour at their local préfecture, and the response they got and processes to follow often varied widely between different areas.

Although it will be up to local préfectures to process applications made via the site, they will be doing so under guidance from the Interior Ministry which has been rolling out training to préfecture staff on handling the simplified applications via the website.

The site requires much less in the way of supporting documents than the old system and if documents need translating some types will be accepted with your own translation, rather than having to pay for a certified translator.

Some préfectures in areas where there is a large British population have also received funding for extra staff to process the applications in their areas.

All applications must be made online, but for people who are not confident using the internet and don't have friends or family who can help, there is support available – the UK government has provided funding to four groups who can help with applications or if necessary even complete the online application for someone.

Llewellyn said: “We really would urge people to start applying as soon as possible on the site and – crucially – tell their British friends, family or neighbours in France about the process.

“Everyone must apply on this site – no matter how long they have lived here or whether they are married to a French person – so it really is important to spread the word.

“We are also here to help at the Embassy and we will be doing lots of information sessions – online at the moment because of the health situation – so people can find information on our Facebook page or contact us or the consulates if they have problems.”

People who already have a carte de sejour permanent still need to use the website, but in their case it is a simple process of swapping the old card for a new one and they do not need to provide any extra documents.

Everyone else needs to make a fresh application on the site – the exception to this being people who applied via the no-deal portal that was briefly live in October last year. Around 9,000 applications were made on this and those will be transferred to the new site, although anyone who has moved to a different département since making their application will have to make a new one as they cannot be transferred between préfectures.

Some people who applied via the no-deal site and who already had a carte de séjour – meaning the process is a simple swap – have already received appointments from their local préfectures to provide fingerprints and complete the process.

For full details on what you need to make your application, click here.

The online portal is for all Britons who become resident in France before December 31st 2020 – the end of the Brexit transition period.

Those that make the move after that will be subject to a different regime – one expected to be similar to that already in place for other Third Country Nationals such as Americans and Australians.

Llewellyn said: “We're still waiting for clarification from the French side on exactly what the system will be for those who move after January 1st but from that date British people will be Third Country Nationals.”

For more details on residency, healthcare, pensions and travel after Brexit, head to our Preparing for Brexit section.