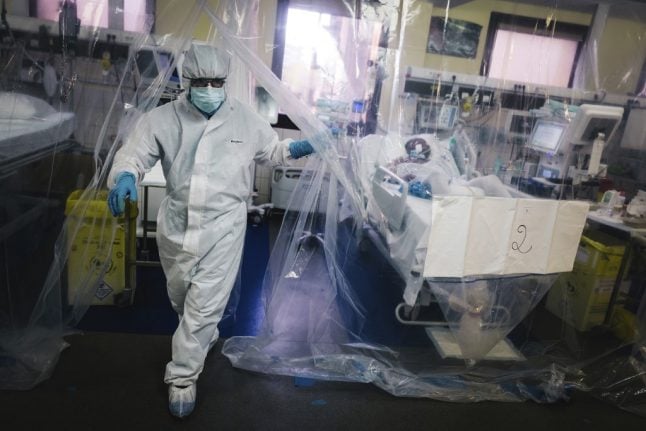 A medical staff member at the intensive care unit of the Franco-Britannique hospital in Levallois-Perret, northern Paris. Photo: AFP

“Currently one person is admitted to hospital because of the virus every minute. Every six minutes a Covid-19 patient is admitted to intensive care,” Health Minister Olivier Véran said in an interview with France 2 on Thursday evening.

Véran was confirming that what hospitals had worried about for months had happened; once again, hospitals in France are at risk of being overwhelmed by Covid-19 patients, just as they had been in March before lockdown.

At the peak of the first wave some of most seriously ill patients in France had to be transferred to other areas of the country, or across the borders to neighbouring countries, as hospitals struggled to cope.

France on Friday counted 6,529 hospital patients and 1,741 patients in intensive care units – much less than the over 30,000 and 7,000 at the height of the pandemic this spring, but still high enough for hospitals to sound the alarm.

Most worryingly, they say, is the increasingly rapid pace of which the numbers rise from one day to the next – just like they were in March.

READ ALSO Is the Covid-19 situation in French hospitals as bad as March?

In Paris, nearly half – 48 percent – of the intensive care unit capacity were occupied by Covid-19 patients on Friday, and the head of the regional hospital group AP-HP, Martin Hirsch, said the number could be up to 90 percent by the end of next week.
“It's inevitable,” he said.
Intensive care rates best indicate the gravity of the Covid-19 situation in the country, because they are the last ones to rise before deaths. Health Minister Olivier Véran said he was offended by the criticism of the government's health strategy. Photo: AFP

Critics have slammed the French government for not preparing for the inevitable, and spending the months between the first and second waves increasing the national intensive care capacity in order to better handle the onslaught this time around.

But the government forcefully defended its strategy this week, with Prime Minister Jean Castex saying that the criticism was “doubly false,” because no country would be able to increase its intensive care capacity that much over a summer.

“It’s impossible in just a few months, it would take several years,” Castex said during a live speech on Wednesday.

France currently has some 5,800 beds on intensive care wards, and “can go up to 12,000 if the health situation were to require it,” health minister Véran said.

“But we're fighting not to have to,” he said in a thread on Twitter where he laid out the government's reasoning behind its approach.

“Our health personnel gave a lot during the first wave and are tired,” Véran said, adding that it “would imply a massive rescheduling and postponing of planned treatments, and serious delays of care.”

Some of the spaces that can be converted into intensive care units are in operating theatres, for example, which would involve cancelling operations.

Simply increasing the number of intensive care beds was not the right way to go, according to the health minister, because it would steal resources from other health care areas.

“Everyone can understand, an anesthesiologist, it's 11 years of training,” Véran said, to illustrate how the government could not just simply snap its fingers and ramp up intensive care treatments.

French hospitals have been struggling to fill their gaps in staff, and not just since Covid-19.

“Nurses would not be more exhausted if the government increased the number of intensive care beds,” said Hugo Huon, a former a nurse and union leader who quit his job at a hospital in Rennes two months ago.

“They are turning the problem upside down,” he said.

Referring to Véran's claim that France could increase its intensive care ward capacity to 12,000 beds if needed, Huon said that meant speed-train staff to do highly technical jobs – as was the case this spring.

“You don't learn how to work in a intensive care over a three hour training,” Huon said, adding that “grave errors” had resulted from that strategy this spring.

In a way, this was the same line argument as the government's, but where the official line said “things take time, but we are working on it,” Huon was more skeptical.

“It's not very complicated, it costs money. But there's no political will to spend.”

BACKGROUND: Why France is planning a massive overhaul of its healthcare system

The right answer, Huon said, would be to increase intensive care capacity while at the same time bolstering the remaining health care system, topping up nurses' salaries and ensuring better work conditions to prevent exhausted staff.

Huon was a leading figure in the months of hospital strikes in 2019, which were interrupted by the pandemic. He said Covid-19 had led to many hospital workers becoming disillusioned with their profession – including himself, which was why in the end he decided to quit.