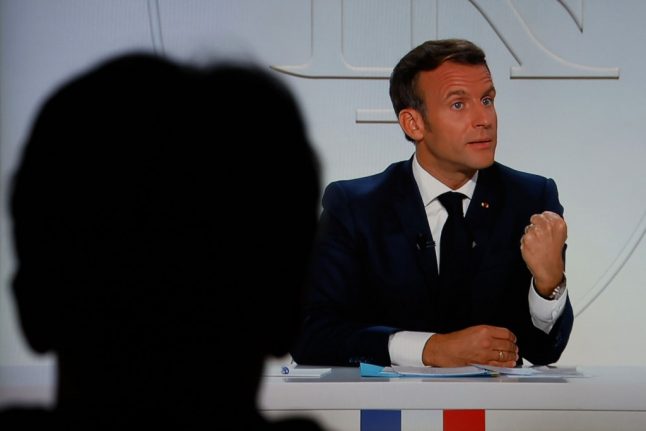 “In restaurants … we said no more than six people around the table. Well, as a maximum, in our private lives, we need to do this,” Macron said in his first lengthy live address to the nation about Covid-19 since the summer.

It was the first time since his announcement of lockdown in March that the president declared imminent sweeping measures to limit social life in the country, including a curfew in nine areas.

The rule also enters into effect immediately and applies to the whole of France, unlike curfew which will be introduced as of Saturday and only in the worst-hit parts of the country.

READ ALSO: What are the rules of France's new nighttime curfew?

So with this new “rule of six”, does that mean French police will now knock on the door of homes to check that no one is having seven guests round for dinner?

The name itself is a bit misleading because the ‘rule of six’ is more a recommendation from the French government than an actual rule with penalties attached for breaking it.

When French authorities deliberated on whether to introduce “social bubbles” such as in the UK, they concluded that it would be too much of a privacy breach and also hard to enforce.

There will be no legal decree to codify the rule. That’s why this rule of six, while enforceable in restaurants, won’t be checked in private homes.

What the government wants to do is to go as far as possible without actually policing private life, and rather appeal to each individual's common sense and push for people to apply the rule themselves.

“This rule of six, which is a rule of common sense that everyone should apply, because it is something that protects us and that will help us slow down [the virus] across France,” Macron said.

The government has several time urged the population to limit social gatherings and refrain from hosting big private dinners parties.

“If everyone sees fewer people every day … we will win over this virus,” Health Minister Olivier Véran said in September.

MAP Which parts of France are on the highest Covid-19 alert levels?

This was, however, is the first time the government has set a maximum limit. Previous attempts from journalists to get a precise number did not yield results.

As late as this week, during a lengthy interview with French media on Monday, Prime Minister Jean Castex declined to answer a question on whether six was the “right number.”

“We cannot make a rule, but you saw that we made it six in restaurants,” Castex said, and urged to apply “common sense” and “respect health gestures” such as handwashing, mask-waring and social distancing.

Again, the ruling line is “common sense.” Macron said each family must adapt to their own situation.

“If we’re a family of seven, eight, nine, 10 – obviously, we continue to have a normal family life, here too we need to show common sense,” Macron said, before adding: “When we invite friends over, we try not to exceed six at the table.”

The president did not specify whether or not there was a difference when counting children and adults, and just used broad terms such as “family” and “friends”.

France has separated children and adults when making other Covid-19 rules such as mask wearing, which is not mandatory for children of less than 12 years old.

The government might provide more details later, as both the prime minister and the health minister will hold press conferences on Thursday.

When Macron was asked whether the rule also applied to other situations such as in the street, he affirmed that it was a general guideline that should be applied in all situations.

“We try not to group together more than six at the time,” he said.

Here is the full plan the president outlined in his Wednesday TV broadcast.