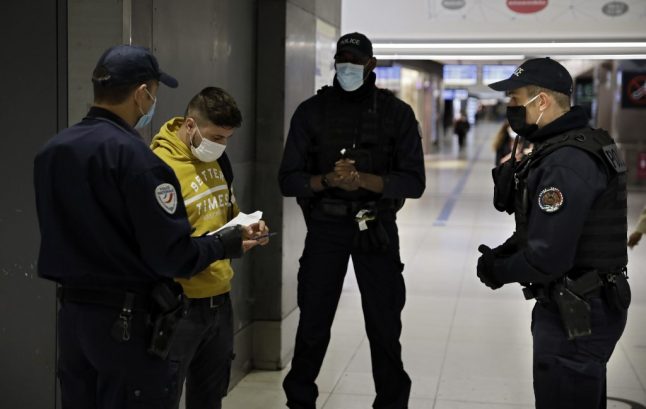 Nine areas of France were put on curfew starting on October 16th and from October 23rd that measure is being extended.

The areas currently on curfew are the whole of the greater Paris Île-de-France region and the “metropole” areas (the city and its surrounding urban areas) of Grenoble, Lille, Lyon, Aix-Marseille, Rouen, Saint-Etienne, Montpellier and Toulouse.

READ ALSO What is a French metropole?

Starting at midnight Friday/Saturday another 38 départements will be subject to the measure.

The curfew runs from 9pm to 6am. As happened with the areas in the first phase, the restriction will be introduced at midnight on Friday (or 00.00 on Saturday if you prefer) and from Saturday the 9pm restriction comes in.

The measures will last for six weeks.

The curfew applies to everyone, but there are exemptions for people who need to work, or travel to and from work, between those times.

Victims of domestic violence can also leave their homes if they don't feel safe, clarified Alexandra Cordebard, mayor of the 10th arrondissement of Paris. There is also a hotline – 3919 – that people can call for help, in addition to the police emergency number 17.

The penalty for breaking curfew is the same as for breaking other health rules – a €135 fine which can rise to €3,750 or six months in prison for repeat offenders.

As with the lockdown, police are on the streets enforcing the rules. In the first week of the restrictions 32,033 police checks were made and 4,777 fines issued.

Do we need permits to be outside?

Yes, it's a return of the ever-popular attestations derogatoires (movement permits) for people in curfew zones – the same as the forms that people needed when outside their homes during the strict lockdown.

Anyone outside their homes during curfew hours needs an attestation showing that they fall into one of the exempt categories and people out for work-related reasons need an additional form.

The form is available to download or in a smartphone versions or handwritten versions will be accepted.

READ ALSO This is how the curfew permission form works

Yes, the government has made it clear that if the curfew has no positive impact in two weeks time they may tighten the restrictions in certain areas by starting the curfew earlier, either at 8pm and 7pm.

Macron says the aim is to bring daily cases numbers down to around 3,000 to 5,000. At the moment the numbers are have been topping 20,000 on certain days.

Announcing the extension of the curfew zones, Prime Minister Jean Castex added: “If we do not collectively succeed in curbing the epidemic, we will have to take tougher measures.

“We still have time to avoid that, but there is not much time left.”

Macron said that the aim was to cut down on socialising events to control the spread of the virus while still allowing normal daily life such as work to continue.

He added that people will have to be organised to ensure they are home by 9pm, saying: “If you live next door to the restaurant, you can leave at 9 pm and be at home. If you have a half an hour journey, you will arrange to leave at 8.30 pm.”

Public transport will continue to run as normal, to allow people who need to get to and from work to travel.