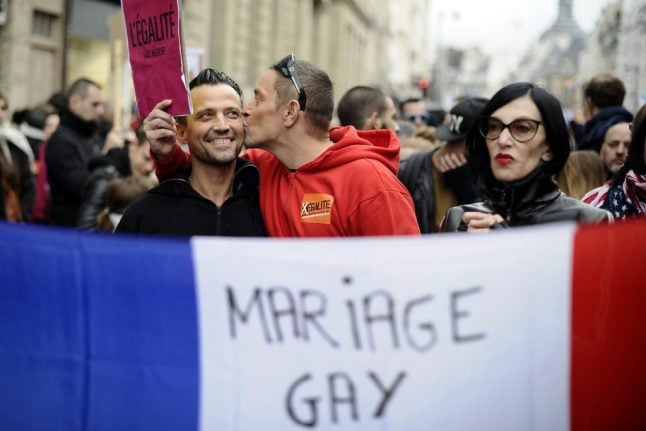 Some 40 measures directed at all parts of society – workplaces, health, sports, education and family issues – will seek to do away with what Gender Equality Minister Elisabeth Moreno said was a little recognised yet profound problem of discrimination towards gender and sexual minorities (LGBT+) in the country.

“LGBT people are totally invisible, they are citizens who have rights but who struggle to have these rights recognised,” Moreno told French media on Tuesday.

“The objective of this plan is to fully recognise these rights, acquired through tough battles, and turn them into reality,” she said. Despite achieving civil rights to marry and adopt, France's LGBT+ community says that their sexual orientations make them frequent targets of everyday discrimination, ranging from more subtle forms of prejudice to outright acts of violence.

Nearly seven out of 10 (68 percent) gay, lesbian, transgender and transexual people said they have incorporated “invisibility strategies” in their daily life to avoid attacks, according to a survey by the French opinion institute Ifop, published in May 2019.

The new plan will aim to put a stop to that through awareness-raising, education and regular reports on how the measures are implemented.

“Gay people were given the right to adopt in 2013, but few actually have access (to adoption),” Moreno said.

To provide LGBT+ couples with a “real access” to adoption, the government will “work together with the family council to understand where the obstacles lie,” Moreno said.

The plan further outlined a targeting of public institutions on all levels that deal with adoption issues – regional councils, social institutions and courts – to “increase awareness” of “non-discrimination” of LGBT+ families and parents. Back in June 2016, the Eiffel Tower lit up in rainbow colours to mourn the victims of the terror attack at the gay nightclub in Orlando, USA. Photo: AFP

The Ifop study cited above found that 22 percent of those asked had been victims of violent attacks at least once in their life.

French police received 1,870 official complaints by victims of homophobic or transphobic acts in 2019.

The new plan will aim to increase awareness on how to treat victims of homophobic or transphobic attacks in police stations, gendarmeries and other legal and policing institutions, from police academy training level right through to public courts.

Police stations will be also get their own LGBT+ champions and Moreno said the government would publish annual reports on how the new measures were put in place in policing services. LGBT activists in France have often taken to the streets to protest discrimination based on their sexual orientation. Photo: AFP

To raise awareness on LGBT+ issues in schools, the government will launch a website called Éduquer contre les LGBTphobies (Educate against LGBTphobias) as a tool for schools to use in the classroom.

Teachers will receive an official guide detailing how to treat transgender pupils and regional school authorities will be equipped with new “correspondents” on LGBT+ rights, which currently only exist in Paris.

Sports, administration and daily life
Similar measures will be taken in other public administrations and sports institutions to raise awareness on discrimination against LGBT+ persons.
There will also be an effort to facilitate the process of filling out forms for transgender people, by letting them use their chosen name during their transition period.
The plan was made in partnership with  Délégation interministérielle à la lutte contre le racisme, l'antisémitisme et la haine anti-LGBT (DILCRAH), which is France's official delegation set out to counter racism, antisemitism and hate against LGBT people.