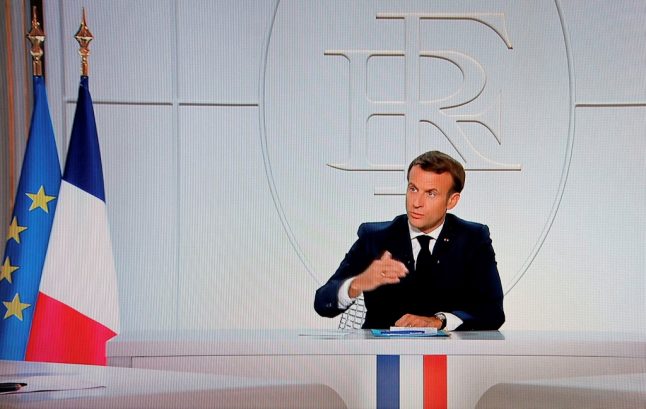 As virus numbers continue to rise in France, the president announced that nine cities and surrounding areas will be subject for a curfew from 9pm to 6am for at least four weeks.

Macron said the government would try to extend the curfew until December 1st.

The curfew order begins at midnight on Friday night into Saturday morning and affects the greater Paris region of Île-de-France as well as the metropolitan areas of Grenoble, Lille, Lyon, Aix-Marseille, Rouen, Saint-Etienne, Montpellier and Toulouse.

All these cities as well as Paris and its surrounding suburbs have been on “maximum alert” due to the rising number of coronavirus cases and the subsequent pressure on hospitals and intensive care units.

MAP Which parts of France are on the highest Covid-19 alert levels?

Macron called the curfew an “appropriate” measure, adding that the government did want to re-impose a second complete lockdown on the country, which he said was “disproportionate”.

'We won't be partying with friends'

“We have to act. We need to put a brake on the spread of the virus,” Macron said, adding the measure would stop people visiting restaurants and private homes late at night.

Anyone caught breaching the curfew in the nine areas risked a fine of €135, Macron said, and for repeat offenders this could rise to €1,500.

“We won't be leaving the restaurant after 9pm,” Macron said. “We won't be partying with friends because we know that that's where the infection risk is greatest.”

Within curfew areas public transport will continue to run as normal to allow people to go to and from work.

“We must break the spread of the virus to protect others, to protect the elderly and the most vulnerable and to protect the health service and health workers,” the president said.

He accepted that restaurants would be forced to close but said the government would ensure they and the staff received financial aid to help them through the crisis.

Macron's appearance followed the announcement by the government that the “state of health emergency” would be reintroduced from Saturday.

The official designation allows the government to impose far-reaching restrictions without the need to go through parliament. The country was in a “state of health emergency” from March, but it was allowed to lapse in July because of the improving health situation.

READ ALSO What does a State of Health Emergency mean in France?

It was the first time the president had spoken at such length about the health situation in the county since July 14th, prompted by weeks of spiking Covid-19 rates that for the first time since March has threatened to overwhelm hospitals in hotspots such as Paris and Marseille.

In Paris, hospital head Martin Hirsch had warned that the region's hospitals could see 90 percent of their intensive care units filled up with Covid-19 patients in less than a fortnight.

“It's inevitable,” Hirsch said, and called for stricter measures to reverse the trend.

READ ALSO Is the Covid-19 situation in French hospitals as bad as March?
Macron said new daily coronavirus cases must be brought down to “3,000 or 5,000”, from current levels, which have reached up to almost 27,000.
But he also ruled out several more strict measures, at least for the moment.
He said reintroducing a full lockdown would be “disproportionate” while insisting that France “has not lost control” of the situation.
He also ruled out introducing any kind of travel ban within France or restrictions on moving between regions. The French “Toussaint” (All Saints) autumn school holiday begins on Saturday, and Macron said that when it came to holidays or visiting family, people should use common sense and stick to health protocols.
He added that he did not want to “infantalise” the French people.
'No more than six at the table'
The president also once again urged the French public to reduce the number of people they have contact with and for the first time suggested that people should not exceed groups of six in private settings such as homes.
Macron called it a “rule of six”, echoing the law in place in the UK, but rather than being a law Macron's announcing was simply a firm recommendation to the public, all around France, not just in those areas on maximum alert.

He told interviewers: “When we invite friends to the house we shouldn't be more than six round the table” but stopped short of introducing laws on socialising or introducing “social bubbles”.
On the subject of working from home, he reiterated that it was recommended, but did not bring in rules forcing either businesses or employees to follow the guidelines, pointing out that for some people – those living in small homes with young children for example – working from home is very difficult.
“We are going to have to deal with this virus until at least the summer of 2021,” Macron said, saying “all scientists” were in agreement on that point.