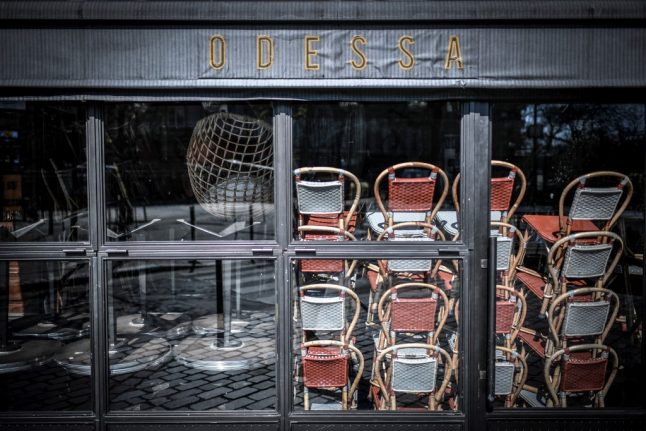 Bars in Paris were ordered to close as the health situation deteriorates. Photo: AFP

From closing gyms, sports centres and bars to restrictions on public gatherings there are a lot of new rules in place. But for some these don't go far enough, while others slammed confusion over the regulations and a lack of enforcement.

The situation for bars is a slightly confusing one – initially bars and restaurants were all ordered to close in maximum alert areas, but the government then announced a compromise that restaurants could stay open. Exactly what defines a restaurant, and what categories cafés fall into, has been the subject of some confusion.

For Alix, 18, closing bars is a logical decision. She said: ‘’It is completely normal. I don’t quite understand how anyone can be at odds with that, given the number of cases going up again! I do not complain, especially because I know I’m protecting my family by not going to restaurants.”

But for Maïa, a 24-year-old 3D animator, the measures are not really justified. ‘’I feel like it is only a way to give the government credibility’’, she sighs. ‘’Since when does a virus strike from 10 pm, and only in bars? What about schools for example?’’

Maïa is far from being the only one pointing out a slight absurdity in the rules.

Andras, 23, strongly agrees. ‘’It is stupid to close bars and keep restaurants open only because they serve food. If we want to stop the epidemic, we should do the maximum and close everything.’’ For Herwig, 49, the measures are necessary, but he has noticed that their application remains uneven in Paris. ‘’If you look around, you can see that almost nothing is closed,” he points out.

To him, restaurants have no other choice than to open, if they don't want to see their business fold.

‘’I would do the same if I had a restaurant, but I don’t think it’s good for public health. The number of cases keeps going up, faster and faster’’, he notes.

Some bars remain open too, ignoring health measures and the risk of getting fined.

‘’The thing is, there will always be bartenders opening despite the ban, as well as people going there anyway…’’, says Andras with a smile.

Even when opening is legal, health measures are not always respected. ‘’I feel like the rules are unclear, some things were different depending on the restaurants I went to,” said Fabien, a 35-year-old Parisian taking a walk along the Canal Saint Martin with his wife.

Karine, a 49-year-old script editor, is furious about the absence of enforcement of those health measures.

“I went to a very famous Parisian restaurant last week, and there was no 1 meter space between tables’’, she said. ‘’Two women decided to leave because of that. People were not wearing masks when they were walking between tables.”

All this mess also exasperates Linda, 35. ‘’I don’t go to restaurants anymore. I don’t even want to eat out or go out!’’, she rages. ‘’And it doesn’t make sense, why should we wear a mask in the street when we’re alone, and remove it in restaurants, with other people?’’

Paris police say they are conducting checks on businesses, and 95 bars were fined and closed over the first weekend of the new rules. Cultural sites such as cinemas and theatres can remain open as long as strict health measures are respected.

Usually, it means wearing a mask at all times, using hand gel and keeping a 1-meter distance between people. But as well as in restaurants, Karine has noticed a few problems.

‘’In cinemas, many people remove their masks during the movie and nobody is there to check’’, she says. ‘’And the distance between people sitting in the cinema is absolutely not respected’’, she frowns.

Karine’s friend Françoise agrees even though, according to her, all cultural sites are not as lax as cinemas. ‘’Measures are respected in theatres’’, she remarks. ‘’Every other seat remains free and people keep their masks on.”

Unlike cinemas and theatres, gyms are completely closed. “It is a real shame’’, says Andras, who works out at a gym in Clichy, a Paris suburb. ‘’But if closing gyms is the right thing to do, then I’ll just do it at home’’, he concludes with a shrug.

‘’It’s really a pain’’, says Fabien. ‘’I got a bit fat since my climbing club is closed, but there is a balance as I go less often  to restaurants’’, he jokes.

Maïa sighs. “Isn’t sport supposed to be healthy?” she says, definitely in disagreement with government measures.

Françoise is quite sad about the closing of swimming pools, which remain open only for minors.

“I can’t take my grandchildren swimming anymore,” she says. “But for the rest, as I am 70, I self-isolate without waiting for official announcements.” The Paris Metro is not always this quiet. Photo: AFP

Work : the only place we can still go to?

Manon, 36, is quite bitter about the work situation. “We only get restrictions on our hobbies and activities, but there is a lot of freedom to go to work… The economy seems way more important than our health,” she says.

‘’Working with a mask all day long is becoming unbearable,” adds Maïa. “On top of that, I work eight hours a day in front of a computer screen, it’s a bit too much,” she explains.

The French government did not add new measures concerning work last Tuesday, although working from home is now strongly recommended for everyone who can, but Andras feels that things need to change quickly.

“I see every day people not respecting the barrier measures. I think it partly explains why the number of cases is going up,” he says.

For her part, and as she works in the cinema industry, Karine has to be on set and can never work from home. She points at the measures that have not been taken especially for people who need to travel for work.

‘’I take trains all the time, many of them crowded, and the passengers are not sitting every other seat like they should, she says.

“I work from home, and it suits me so far’’, says Herwig. “We have a small child, and he can still go to school, so I just hope the schools remain open.

“But I think that sooner or later, the government will have to take stricter measures for Paris. I hope I am wrong !” he concludes with a smile.