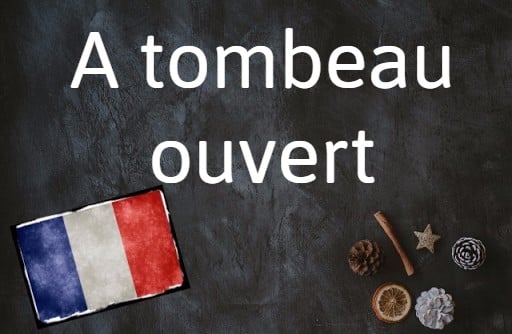 Why do I need to know à tombeau ouvert ?

Because once you've spent some time driving on French roads you might find this one very apt.

A tombeau ouvert dates back to the end of the 18th century and is always used after verbs that indicate a movement, for instance to gallop.

A tombeau ouvert was first used to raise awareness of the danger of high speed while riding a horse.

Tombeau means tomb, and ouvert means open, so to gallop à tombeau ouvert basically meant that you were running the risk of being in an accident, and therefore a wide open tomb was waiting for you if you kept on going fast.

Following the invention of the internal combustion engine à tombeau ouvert came to be used primarily with the verb conduire (to drive) and it remains the case today.

So literally, if you are driving à tombeau ouvert, it means that you will be heading straight for the grave if you don't slow down.

It's similar to its English equivalent 'to drive at breakneck speed' in that it doesn't literally signify that you are about to die, just that you are travelling dangerously fast.

J’ai vu une Porsche rouler à tombeau ouvert sur l’autoroute – I saw a Porsche going like a bat out of hell on the highway.

A bride abattue – At full tilt

A toute allure – Flat out

Comme un dératé – Like a bat out of hell