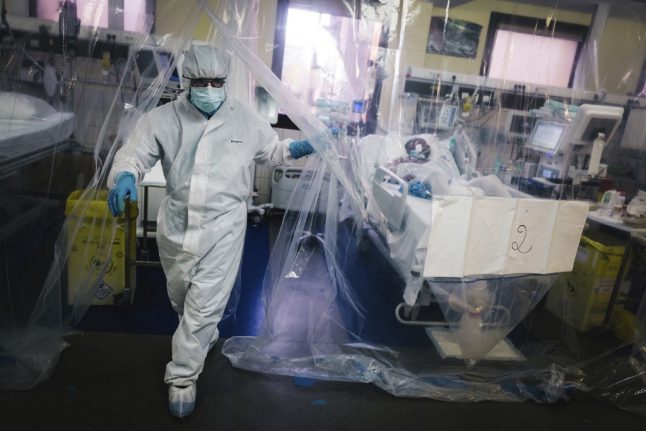 The French government's Defence Council will meet on Tuesday to discuss possible new measures to curb the rapid spread of the virus, which  has caused a mounting pressure on hospitals in big cities.

“We must take extremely draconian measures in terms of restraining society,” virologist Xavier Lescure told BFMTV on Monday, echoing a call for stricter rules that has become more common among health professionals in France lately.

Usually the death tally in France spikes on Mondays due to a weekend-lag in reporting deaths in hospitals, however this week’s number was higher than previous Mondays and followed a trend of rising death and hospital rates over the past weeks.

France’s hospitals counted 976 new admissions on Monday, which was more than the past seven day’s average of 764 patients per day.

The situation is especially bad in Paris, where intensive care units are rapidly filling up with Covid patients. Hospitals in the greater Paris region Île-de-France could reach a 70-90 percent of their total capacity by the end of the month, director of the AP-HP hospital group in the Ile-de-France, Martin Hirsch, told French media.

President Emmanuel Macron will be speaking live to the nation on Wednesday evening, just days after Prime Minister Jean Castex said local lockdowns “cannot be ruled out” if the situation does not improve in the country’s hospitals.

Pointing to the nine cities currently on “maximum alert” for Covid-19, Castex said the government was considered even stricter measures if the ones currently in place did not yield positive results in the fortnight for which these measures had been set in place.

“If in this period of 15 days we see that the situation deteriorates a lot, that the intensive care beds fill up even more than what was foreseen, we could take supplementary measures,” Castex said.

Jean-François Mattei, president of the Academie nationale de médicine, told French media: “We still have the possibility of avoiding total lockdown but we will go towards partial lockdown which could be geographically located or we could go towards a curfew, for example from 8pm to 5am.”

In the Bouches-du-Rhône département, home to Marseille and one of the areas currently on “maximum alert”, local authorities asked for more resources to help police the city's bars and restaurants, after initial checks showed many were not correctly complying with the new, strict health rules in place.
France also reported 8,505 new Covid-19 cases and 55 additional clusters on Monday, bringing the total number of clusters under investigation up to 1,496.