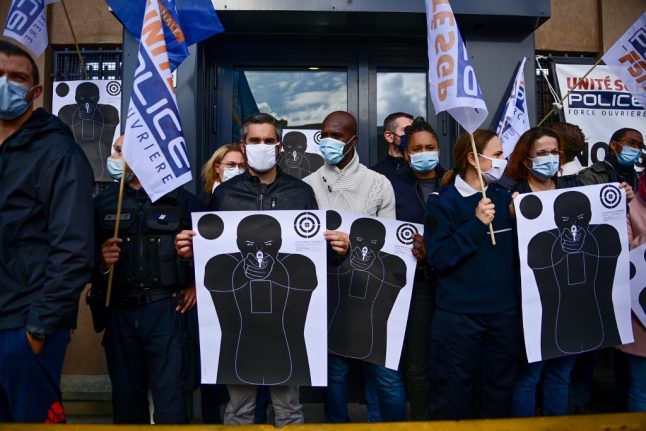 Champigny-sur-Marne on Saturday night saw the latest in a string of assaults on the security forces, who have been repeatedly targeted, by jihadists and youths in deprived areas.

Around 40 people armed with steel bars besieged the station, smashing car windows and the entrance door before setting off a flurry of rockets that lit up the night sky. No injuries were reported.

Coming in a week when two police officers were shot while carrying out surveillance in the northwestern Paris suburb of Herblay, the attack added to the discontent brewing in the ranks.

“What happened on Saturday night was the last straw,” Bruno Angelo, the deputy regional leader of the United SGP Police trade union, told AFP on Monday.

Describing a force at the end of its tether, he called for stiff punishments against the “young hoodlums” behind the attack so that “they'll think twice before doing it again.”

An officer from the station, who did not wish to give his name, told AFP that he no longer felt safe at his workplace.

“It's already hard enough outside and now you feel that there is no respite, even when you're back inside (the station),” he said.

Prime Minister Jean Castex vowed to “show no mercy” with the perpetrators.

“When you see a police station being attacked, like in Champigny-sur-Marne, when you see two officers being savagely attacked, like last week in Val d'Oise, you say to yourself that the the state and the republic are being targeted,” Castex told France Info radio on Monday.

He said police efforts to stop drug trafficking had “not gone down well” with the criminals and vowed: “We won't be deterred.” Tear gas canister see after the attack on the station. Photo: AFP

Morale has been at a low ebb in the French police over the past few years. Officers complained of coming under sustained attack while policing anti-government “yellow vest” demonstrations as well as during anti-drug operations in the high-rise estates that ring major cities.

A November 2019 study by France's national crime observatory (ONDRP) found that 6,002 police agents were wounded on duty during 2018, a 16 percent jump from the previous year.

ANALYSIS: Has crime in France really spiralled out of control since lockdown?

Of these, 666 officers were wounded by guns, knives or other weapons compared with 418 in 2017. But the police have been repeatedly accused of brutality during operations in suburbs with big immigrant populations as well as while trying to disperse protests.

In June, thousands of French people took part in the global Black Lives Matter protests sparked by the death of black American George Floyd at the hands of US police.

The protesters said Floyd's death echoed incidents of death and injury during police operations in France.