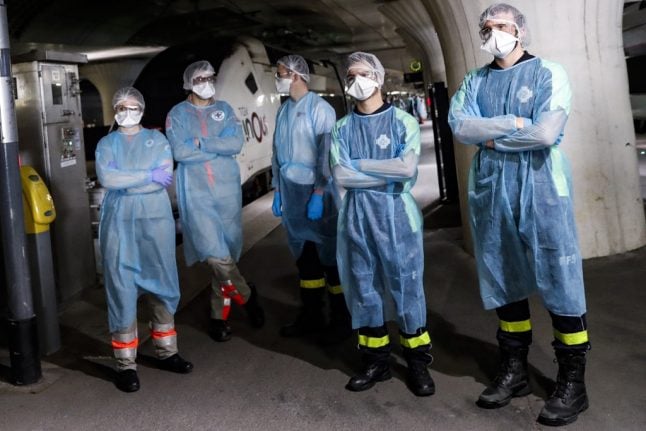 When the French government imposed the nationwide lockdown in March, they did so as a last resort to save the country’s hospitals from buckling under the mounting pressure of new patients.

While the number of cases recorded every day in France has exceeded the daily tallies from this spring – health authorities now report roughly 15,000 new cases per day as a weekly average – the country's testing capacities has vastly expanded since then and the two situations are not easily comparable.

What can be compared, however, is the situation in hospitals, as they again to sound the alarm that their capacities are again being strained.

Lescure was pointing to the fact that intensive care unit rates are the last ones to increase before death rates.

When someone gets sick from Covid-19, there is a time-lag of about two weeks before their symptoms potentially turn severe.

For weeks when France’s Covid-19 numbers were rising this summer, the general increase in new cases did not translate into a spike in hospital numbers, which was largely thanks to that most of the new cases were young and healthy people.

That changed in September when the virus increased its spread among the country's elderly, leading to hospital rates rising with an increasingly rapid pace until intensive care units now have exceeded a volume of Covid-19 patients unseen since the end of May.

Lescure, who works at the Bichat Hospital in Paris, a reference hospital for Covid-19 patients, called for “draconian measures” to reverse the trend.

That plea has echoed from hospitals in several of the country’s hard-hit areas, which puts more pressure on President Emmanuel Macron, who is widely expected to announce tighter restrictions in a prime-time TV interview Wednesday night.

So is the current situation in French hospitals as bad as it was back in March?

On Monday, October 12th, France topped a threshold of 1,500 intensive care unit patients, 1,539 in total, while the total number of hospital patients with Covid-19 reached 8,671.

Intensive care unit numbers remain low compared to at the peak of the first wave of the virus in early April, when hospitals saw 7,019 intensive care patients (April 4th).

However, the last time France counted around 1,500 intensive care patients, the number more than tripled in one week: from 1,453 patients on March 21st to a total of 5,056 on March 30th.

The graphic below, which is a screenshot from the French public health agency's daily updated website, shows the total number intensive care patients in France from March 18th (one day after lockdown) until October 12th.

The graphic illustrates the steep rise in new intensive care patients back in March, which is what hospitals worry about in the coming weeks.

To better understand the increase in intensive care unit patients, another indicator to watch is the number of new admissions per day, as shown in Santé Publique France's graphic below (from the same time period).

At the height of the first wave intensive care units saw over 700 new admissions a day, compared to 171 currently.

But looking back to mid March, the rate surged from 242 to 695 new admissions per day from March 20th to 28th – before dropping slightly and then spiking again – spelling trouble for what hospitals warn lies around the next corner.

The new intensive care admissions followed in the same pattern as the number of new general Covid-19 hospitalisations (graphic below).

What does this mean?

These numbers illustrate how hospital numbers increased with high intensity over a short period of time in March.

What worries hospitals this time around is not so much the current total number of intensive care unit patients as their potential to double or even triple in just days, potentially overwhelming establishments in hard-hit areas such as Paris and Marseille.

How many intensive care beds has France got?

That is a big controversy in France right now. Health Minister Olivier Véran previously told French media that France had reached a capacity of “nearly 14,000 beds, compared to 5,065 normally.”

However, this number was based on calculations during the height of the first wave of the virus when several hospitals transformed into coronavirus-only establishments, turning operating surgeries into intensive care units in order to deal with the overwhelming demand. The country increased its capacity from 5,000 beds to 10,000 (including temporary beds and a military hospital) although the numbers peaked at 7,000.

Today, the capacity in France remains at 5,000 intensive care beds in total, despite the health ministry outlining a need for 12,000 beds in an official recommendation, published in July.

The government has defended their strategy by saying that intensive care treatment should be a last resort, and other strategies should be prioritised first.

What’s the situation in the different areas?

While nationwide numbers say something about the general situation, the regional differences are significant in France, with hospitals in hotspots like Paris bearing the brunt of seriously ill patients.

The map below shows the number of intensive care unit patients in different parts of France as of October 12th. The greater Paris region Ile-de-France, one of the areas suffering the highest hospital numbers at the moment, has warned that they could soon be overwhelmed by new Covid-19 patients.

Covid-19 patients could occupy 70-90 percent of the capital's total intensive care capacity as early as next week, said Martin Hirsch, the director of 39 hospitals in the greater Paris region Ile-de-France.

“This is inevitable. The situation is serious,” Hirsch told French media on Monday.

“By around October 24, there will be a minimum of 800 to 1,000 Covid patients in intensive care, representing 70 to 90 percent of our current capacity,” he said.

Similar warnings have echoed from hospital leaders in several of the other eight Covid-19 hubs. A total of nine cities in Paris are currently on “maximum alert” for infections, which means that, among other criteria, Covid-19 patients occupy 30 percent of their intensive care unit capacity.

Hospitals have said they do not want to repeat of the situation in spring, when non-Covid treatments and operations had to be postponed in order to cope with the spike in new patients.

“What is happening now has serious consequences in terms of public health, for the protection of all citizens,” he said.

“No one wants a choice to be made between (prioritising) patients or diseases. It is therefore today that we must act,” he said.