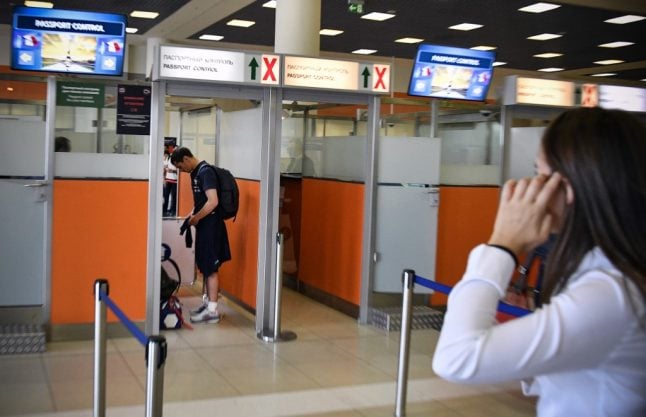 Many things will change for British citizens from January. Photo: AFP

Although the UK actually left the EU in January 2020, the rest of the year was a transition period, which meant that on a day-to-day basis not much changed.

But after the end of the transition period on December 31st, 2020 the differences will start to be felt.

Here's an outline of what is changing;

This isn't a permanent consequence of Brexit, but in the short term entry to France might be limited for British people after January 1st. This is because of the EU's Covid rules for non-European countries.

Since March, the EU's external borders have been closed, which means that travel is only allowed for essential purposes from countries such as the USA and Canada. That means no tourism, no family visits and no visits for second-home owners.

From January 1st, the UK will be outside the Bloc, so will fall under this rule unless an exception is made.

From January 1st 2021, British people no longer get to use the EU passport queue at ports, station and airports.

This probably won't have a huge impact on most people but the tous passports queue tends to be longer so if you are planning a very tight connection it might be wise to bear this in mind.

French customs officials have also warned that people arriving on the Eurostar at Gare du Nord could face longer waits due to the required extra checks, and an expanded waiting area has been created for arrivals from the UK.

From January 1st, British passports that have less than six months until their expiry date will no longer be valid for travel within the EU.

This is the same rule that is already in place for British travellers to several other countries, including the USA, but will now also apply when travelling inside the EU. So anyone whose passport is nearing its expiry date will need to renew.

READ ALSO How will the 90-day rule work in France after Brexit?

The French government has now published its visa requirements for UK nationals – click here for details.

Britons who are resident in France before December 31st 2020 do not need a visa.

For British residents of France who want to travel in and out of France between January 1st and October 1st, the Interior Ministry advised that it would be easier to have either a carte de séjour or the certificate of application for the card at the border in order to avoid being mistaken for a tourist.

When you apply for the carte de séjour online you receive an automated attestation d'enregistrement via email which can be shown at the border as proof that you are a resident.

Visitors to France can continue to drive on their UK licence after January 1st and do not need an International Drivers Permit. You will, however, need to get a 'green card' from your insurance company which acts as proof that you are insured.

British residents in France will need to swap their UK licence for a French one – but you have until December 31st 2021 to make the swap – full details here.

In the end Britain's Brexit deal with the EU did contain details on health cover for UK visitors to Europe. Buried away deep in the Christmas Eve Brexit deal was details on the provision of reciprocal health care for Brits visiting the EU and EU citizens in the UK.

The UK government has said UK residents with a current EHIC card can use it until the date expires.

The Brexit deal also contains mention of a new UK-specific health insurance card, which will be introduced at some point in the future. This link contains the latest info on EHIC cards.

British residents living in France will need to register with the French healthcare system if they have not already – here's how to do that. Once you are registered, you will also need to a apply for a carte européenne assurance maladie (CEAM) which is the French equivalent of EHIC and entitles you to treatment elsewhere in Europe, or in the UK if you are covered by the Withdrawal Agreement.

From October 2021, the UK will no longer allow entry from EU citizens with an ID card, only a passport will be accepted. This won't affect many Brits as French ID cards are only issued to French citizens, but if you're planning a trip to the UK with your French partner, friend or mother-in-law you need to remind them that they will need a passport to travel.

Probably the biggest post-Brexit travel complications are for four-legged travellers, since the EU Pet Passport scheme, which has allowed reasonably frictionless travel for dogs, cats and ferrets, will no longer apply.

An agreement of sorts has been reached on this, with the UK being granted 'listed' status. But travelling with a pet will still be more complicated and require different paperwork – full details here.

The cherished tradition of the French booze cruise will be coming to an end, with the reintroduction of strict limits on the amount of alcohol and tobacco that can be brought over the border without paying import duty.

The UK government has now published details of how much alcohol you can bring back from France, and although it's enough for some decent holiday souvenirs, the days of driving to Calais and loading up the car are over. There are also limits on the total value of all types of goods you can bring into the UK from France.