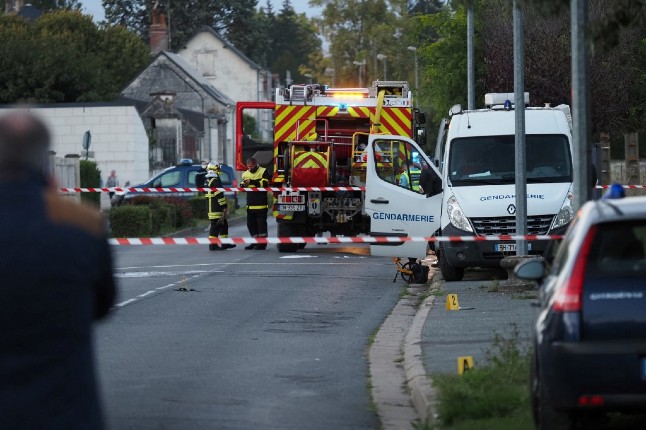 French gendarmes work next to the site where the plane crashed in Loches. Photo: Guillaume Souvant/AFP
The small microlight carrying two people collided with a DA40 tourist plane with three people onboard around 4:30pm (1430 GMT) in Loches in the Indre-et-Loire department, local government official Nadia Seghier told AFP.
“(The microlight) landed on the fence around a house without harming anyone else, (the DA40) several hundred metres away in an uninhabited area,” Seghier said.
Gregoire Dulin, a prosecutor from nearby Tours, said that four bodies had been recovered from the microlight and the larger plane.
“One person who supposedly fell, certainly from the plane, has not yet been found,” he said, adding that the larger plane had crashed into a tree in an area that was difficult to reach.
Eyewitness Genevieve Allouard-Liebert said she had heard a “big crash” while outside in her courtyard with her husband.
The pair saw a man fall tens of metres (yards) from the larger plane into a field as the aircraft skimmed nearby rooftops, she added.
A 75-year-old was piloting the plane with two passengers aged 28 and 30, while a 66-year-old was at the controls of the microlight with a passenger aged 50, Dulin said. None of the people involved in the crash were related.
Around 50 firefighters were called out following the crash, while 30 police officers set up road detours around the two crash sites. The causes of the collision remain unclear.
“There's never any air traffic around Loches, it's an unlikely and unbelievable accident,” mayor Marc Angenault said.
He suggested that the blinding late afternoon sunlight could have dazzled one of the pilots.
Collisions between microlights and other aircraft are rare, although an August 2019 crash between a microlight and a helicopter over the Spanish island of Mallorca killed seven including two minors.