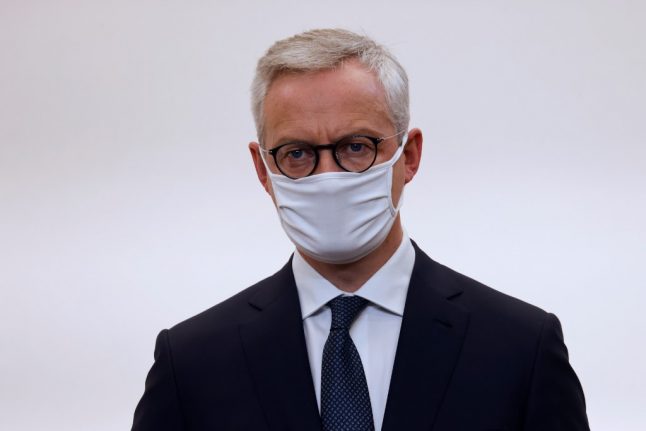 Economy Minister Bruno Le Maire. Photo: AFP
“It makes more sense to strengthen economic support for businesses rather than having to deal with thousands of bankruptcies and booming unemployment,” Bruno Le Maire said.

This came the day after President Emmanuel Macron had declared that nine cities would be placed under a nightly curfew, to stem the spiralling Covid-19 rates in their areas.

To account for the negative impact the government's new Covid-19 measures had on certain sectors, Le Maire said the government had decided to strengthen the public economic help schemes in place.

Solidarity fund available to all

To soften the economic blow the 9pm-6am curfew would have on businesses, the “solidarity fund” – which gives economic help to self-employed and small business owners – would be extended to all businesses in the curfew zones.

The fund was already bolstered last week together with the government's furloughing scheme, after the government placed 11 cities on “maximum alert”, the official label that entails swift new restrictions.

“We will continue to protect employees for as long as the epidemic is here,” Le Maire promised then.

What is the solidarity fund?

Set up in March, the solidarity fund was meant to be a temporary help scheme for businesses that saw their incomes drop dramatically during lockdown.

The grants were capped at €1,500 maximum per month, a relatively small sum that was meant to help small businesses and self-employed make it to the other side of lockdown without going bust.

As the gravity of the virus’ impact on the French economy became clearer, the government added several billions into the scheme, prolonged its longevity and extended it to include businesses with up to 20 employees (from 10 previously).

Last week the government raised this limit to 50 employees.

Until recently, the fund was reserved for the tourism and hospitality sector.

Last week the government opened up for another 75,000 additional businesses in other professions that suffered suffered the consequences that Covid-19 had for tourism, cultural and sporting activities.

In curfew zones – the greater Paris region and eight other cities – the solidarity fund will be made available to all companies, “regardless of the sector to which they belong” for the entire duration of the curfew, Le Maire said.

To apply for a grant, a business must have seen their incomes drop by more than by 50 percent of their normal monthly takings (down from 70 percent previously).

How big are the grants?

The grants are monthly and capped at €1,500 maximum, or €10,000 maximum for the tourism or hospitality sectors, such as bars, restaurants.

Le Maire also specified that the comparison would be the three best months of 2019, rather than the annual average or the same month the previous year, as was the case until now. That means both be easier to access grants and that businesses will be able to get bigger amounts.

Businesses apply via the online tax system – click here and log in to your espace particulier to fill out the required form. For more information on the exact steps of the application process, read our article on how to apply here.

France's furloughing scheme was set up in order to prevent mass-layoffs during the lockdown when businesses saw their incomes drop.
Like similar schemes in other countries, the French government incentivised businesses to keep their employees by registering them as “partially unemployed” and let the state foot the bill for their salaries.
READ MORE Chômage partiel: What you need to know about France's crisis unemployment scheme
After things started looking more promising on both the health front and the economic front this summer, the government began to phase out the scheme.
Le Maire said the state would ensure a 100 percent coverage (up from 85 percent currently) for businesses in hard-hit sectors that furloughed their employees.
Businesses in sectors such as tourism, events, sports and culture will be able to benefit from this scheme until the end of the year.

Other businesses can still access the scheme at the 85 percent rate. This is not limited to any specific sectors, businesses just need to be able to show that their earnings have been impacted by the pandemic.

Tax exemptions
All businesses that must close down due to the curfew will be exempt from what in France is called charges sociales (the social contributions that businesses make for each employee's pension, healthcare etc) for as long as these restrictions are in place, the economy minister said.
Businesses in the hospitality, tourism, events and sports sectors may also be exempt from these taxes if their incomes decrease by at least 50 percent during this period.
Businesses that suffered big economic losses this spring can also apply for a retroactive exemption for the period of February-May 2020.
State-backed loans
Special government-backed bank loans will be extended and made accessible until June 30th 2021.