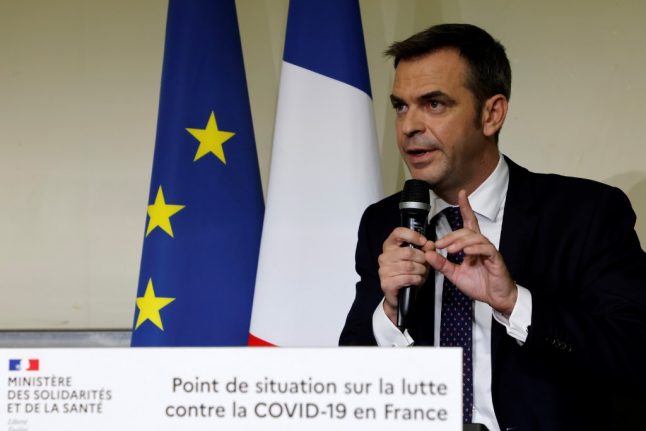 The metropole areas of Lille, Lyon, Grenoble and Saint-Etienne have joined Paris and its suburbs and the Aix-Marseille area on maximum alert.

The new designations will take place from Saturday morning and will see the closure of all bars in those areas, although restaurants can remain open under strict new conditions.

The bar closure will be for an initial 15 days, although it will only be lifted if the health situation in the area has improved.

Two other areas – Toulouse and Montpellier – were described as “worrying”. Health minister Olivier Véran, in his weekly briefing on Thursday evening, said that if their numbers did not improve in the coming days they faced going onto maximum alert from Monday.

“The health situation in France, alas, is continuing to worsen,” Health Minister Olivier Veran told the nation in a live broadcast on Thursday evening as France recorded another 18,129 Covid-19 infections and 77 ore coronavirus-linked deaths.

“The epidemic continues to deteriorate in France, like it does in several European countries.

“When I say that each French person can make a difference, it’s to say that we need to be vigilant at every point during our daily lives,” he said, urging the French population to rigorously respect the government's health rules such as handwashing and social distancing.

The French government is trying to avoid another nationwide lockdown of the type the country saw in March and April, which did major damage to its economy.

Instead it has created a system of local alert levels. Each level carries with it restrictions, from a limit on wedding guests at the lowest level to the closure of bars, gyms and sports centres in places designated 'maximum alert'.

“For the metroples, Lille, Grenoble, Saint Etienne and Lyon, we have decided to bump them up to maximum alert,” Véran announced.

The designation was expected, and French media had reported on Wednesday that all four areas had breached the thresholds set to declare an area on “maximum alert”. These are; 250 active Covid-19 cases per 100,000 of the population, 100 cases per 100,000 among the elderly and vulnerable population and more than 30 percent of beds in local intensive care units occupied by Covid-19 patients.

Toulouse and Montpellier were also seeing worsening Covid-19 numbers, he said, but had not yet reached all the three thresholds set to label an area as on “maximum alert”.
“In the case of Toulouse and Montpellier, we are giving it a few days to observe the development of the health situation and see if the criteria are met,” Véran said.
If the numbers in the city's intensive care units increased and the situation worsened in the coming days, the two cities would, as was the case in Paris last week, be bumped up to “maximum alert” with restrictions entering into effect as of Monday, he said.
Two other cities were added to the “heightened alert” level, the level below maximum, they were; Dijon and Clermont-Ferrand, which join Bordeaux, Rennes, Rouen and Nice on the heightened alert level.
There are now 72 départements on the lower level of 'alert' with Mayenne and Lot-et-Garonne added to the list. The départements of Morbihan and Nievre however were removed from the list on alert.
France is approaching its October school holidays, the Toussaint break which begins on Saturday, October 17th, for a week.
Asked whether it would be possible to go away during the school break, Véran said the government had decided not to limit travel between cities.
“We are not in a situation like we were a few months ago when we decided to restrict travel,” he said, adding that “travelling from one area to another is not likely to bring the virus from one area to another.”
He did however add a message of caution: “We must remain very careful during the holidays, the summer period showed us that. The Toussaint holidays are often spent with the family, my message is even stronger: protect yourself, protect the others.”
Asked why crowded public transport means such as the Metro would keep running while bars had to close, Véran said public transport “helps us get to work.”
“The question of bars, alas, is more complicated, they are sources of clusters, studies show it,” he said.
The subject of bar closures has been a controversial one. Initially areas on maximum alert were forced to close all bars and restaurants, but after meeting delegates from the hospitality industry the government rowed back on that and decided that only bars had to close.
A bar is defined as a business where the primary business is selling alcoholic drinks, even if it also offers food.
READ ALSO Bars, cafés and restaurants – what has to close under the new restrictions?