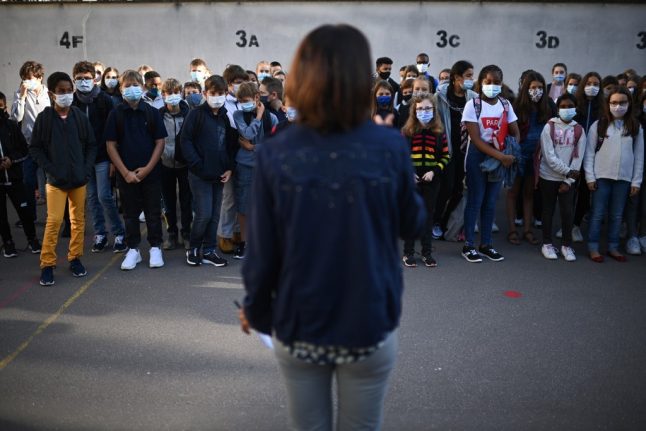 France's schools has issued strict rules on mask-wearing in a bid to stem the spread of Covid-19 in its education establishments. Photo: AFP

As France’s Covid-19 numbers continue to spiral, especially in the big cities, some have asked whether the restrictions soon could be targeting the country’s schools, as was the case this spring when schools closed down temporarily in a bid to slow down the spread.

The government has reiterated since they began to ease the lockdown in May that one of their top priorities was to get children back to school and keep them there.

“In the life of a child, staying at home for two months is traumatising,” President Emmanuel Macron said a few months back, as he laid out the government's strategy to return all children to the classroom while keeping a close eye on Covid-19.

Both Macron and former prime minister Edouard Philippe also said they were concerned about the impact on equality, as school shutdowns hit the most disadvantaged pupils the hardest.

Keeping the country's children in school was later echoed in the government’s change in strategy for limiting the spread of the virus within schools after semester start this autumn.

Whereas in the early days of September, any establishments that reported having identified cases of the virus closed down nearly immediately, schools or individual classes now only close in the event of a cluster inside their premises.

READ MORE Covid-19: What you need to know about France's new health rules in schools

Clusters, not cases
“It is out of the question that we send all children home, or even close entire schools at the first alarm,” Health Minister Olivier Véran said when he announced the strategy switch on September 23rd.
In a few weeks, number of schools closed due to Covid has dropped down from 81 to 15, the latest number was given by Education Minister Jean-Michel Blanquer on Tuesday in an interview with France 2.

Blanquer was defending the government’s recent decision to limit the number of students allowed inside university lecture halls to a 50 percent capacity maximum in all of France’s heightened and maximum alert zones, while at the same time not taking similar measures in high schools and other education establishments.

“The first scenario is the one we’re have today, with all children in France back to school, which is something I think we should be pretty happy about,” he said.

He added: “There’s also a second scenario.. similar to what we saw in June.”

That scenario would be “similar to the one in universities,” Blanquer said, which meant limiting the number of pupils allowed in schools to “one in two.”

Asked what threshold of contagion had to be reached before the government would take steps in the direction to issue rules on school attendance in areas that were hard hit by the virus, Blanquer said that “must be considered together with health authorities.”

“For the moment this is not a priority, because there are very few clusters today in French schools,” the education minister said.

READ MORE: These are the Covid-19 health rules in place in French schools

How much Covid-19 is there in French schools?

The definition of a cluster is confirming “at least three positive cases or probable cases over a period of seven days who have been at the same place, whether they know each other or not,” according to France’s public health agency Santé Publique France.

Blanquer did not provide details over how many of the 15 schools currently closed that were primary or secondary schools, but he said it was “15 out of 60,000, so a very reasonable number.”

France counts a total of 61,510 schools (52,246 of which are public) of second degré, which is the official term used about secondary and high schools, according to the education ministry.

The minister therefore seemed to be referring to only secondary and high schools.

That meant around 0.05 percent of the total primary and secondary school establishment had closed, according to the government.

Does that mean there's generally less Covid-19 in schools than other places?

Schools and universities were actually the biggest source of contagion when looking at all the clusters currently under investigation by Santé Publique France.

In its latest weekly report, the public health agency reported a total of 550 clusters in French schools per September 28th, an average of 163 new clusters per week and 36 percent of the total clusters that were identified at the time.

However, the government has previously said the clusters only account for a small proportion of the total identified cases and Santé Publique France also noted in their report that, due to the high level of spread in the country at the moment, the current number of total clusters is “probably largely underestimated”.

Most of the clusters in schools were in the greater Paris region Île-de-France (24 percent of the total), Nouvelle-Aquitaine (15 percent) and Occitanie (10 percent).
Full graphic detailing the origins of the clusters under investigation here: