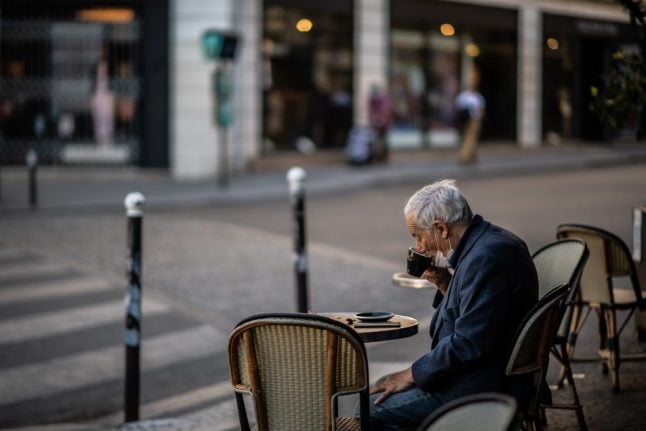 With Paris placed on the 'maximum alert' level because of spiralling Covid-19 case numbers it faces strict new controls that distinguish between bars and restaurants.

But a number of places in the city are really a combination of both, especially cafés. Most city cafés have tables for eating and those for people who just want a drink or a coffee. Photo: AFP

Cafés are venues for everything from a quick coffee to a three-course-meal or a few beers with your mates. Once you add in bistrots, brasseries, bars and bouillons the picture becomes even more complicated.

Under the new rule bars must close for 15 days, while restaurants can stay open.

The new rules entered into effect on Tuesday, October 6th, so what exactly is closing?

Paris City Hall said only bars will close, and defined a bar as a “an establishment whose principal activity is selling alcoholic drinks.”

So this would cover places that sell either no food or very little food, sports bars and theme bars like Irish pubs.

Restaurants, bistrots and brasseries – whose main activity is selling food – will not be affected.

Cafés generally straddle a middle ground between bars and restaurants since they have some tables set up for eating and some set up just for drinking. Those who define their 'main' business as food would be able to stay open, but some smaller establishments may find the new health protocols too rigorous.

The City's definition was echoed in the Paris police's Q&A form, published on Monday evening, where they answered frequently asked questions to clear up confusion related to the new rules.

“Establishments that offer both bar and restaurant services may exercise their restaurant activity while always in strict compliance with the health protocol,” the police said.

They also specified that bars could “only, if they wish, keep a delivery or take away service.”

During the lockdown, some bars ran on a minimum take away service, selling bottles of wine, beer and other alcoholic beverages along with any snacks, cookies, coffee, etc.

Shisha bars, which generally don't serve alcohol, will according to the Paris police have to close “due to the nature of the activity.”

Salons du thé or tea rooms were not specifically mentioned, however the police said all establishments that do not serve alcohol may keep open as usual.

The government's new health protocol – which concerns Paris, Aix-Marseille and Guadeloupe, the three areas in France on “maximum alert” – also provided some clarity as to how police will discern between the different types of establishments when checking that they comply with the new rules.

Establishments that remain open will have to follow strict new health protocols, in addition to the rules on masks, physical distancing and barrier gestures that are already in place.

These include taking contact tracing information from all customers, having at least 1m between tables and mask-wearing enforced when moving around the restaurant and in between courses.

The full rules are here: What are the strict new Covid-19 rules for going to a restaurant in Paris?

The protocol differentiated between traditional restaurants, cafeterias and other self-service establishments, fast-food restaurants and drinking establishments by their business registration number, the NAF number.

“The drinking establishments (code NAF 56.30 Z) will be closed. Note that among these establishments, those offering the sale of drinks as an accessory to restaurant activity may remain open,” the protocol stated.

However, establishments that stay open would have to “document the accessory nature of their drink sales” in the event of a police check, according to the protocol.

Why bars and not restaurants?

Many people – including not a few bar owners – are asking why bars have been singled out like this and the rationale seems to be a combination of behaviour patterns and political pressure.

When first announcing the early closure of bars, health minister Olivier Véran justified the distinction like this – people in restaurants tend to stay seated and if tables are well spaced out the you can enjoy a meal out and still stay appropriately distanced.

The early closure of bars was also justified on behavioural grounds – after 10pm once people have had a couple of glasses of vin rogue they tend to forget distancing measures and engage in risky behaviours like standing close together and taking off the mask.

However there is a second strand to this – political and economic pressure. The hospitality industry, already struggling after the two-month lockdown in the spring, has lobbied hard for exemptions.

The original maximum alert measures involved the total closure of all bars and restaurants – this is the regime that was imposed on Marseille, which was the first area to be placed on maximum alert. Only after a meeting with representatives of the hospitality industry – which employs around 1 million people in France – was a compromise reached allowing restaurants to stay open. Why bars and restaurants at all?

Hospitality industry representatives have also pointed to the relatively low level of cases that can be traced back to cafés and bars and asked why their industry has been targeted when crowded Metro trains still run and busy workplaces remain open.

The French government is attempting to steer a line between keeping cases under control whilst avoiding another full lockdown of the type that did such damage to its economy in the spring.

This is the same balance that every country is trying to strike, and nowhere seems to have found the perfect solution. When unveiling the localised alert system, Véran said the government was attempting to maintain a relatively normal daily life and economic activity while limiting the spread of the virus, but acknowledged that this was a difficult process.

The government is keen to shut as few workplaces as possible – or to restrict public transport which would make it hard to get to work – but has told everyone who can work from home to do.

Many people have been sharing pictures of crowded Metro carriages, but it seems that few cases – both in France and globally – have been traced back to public transport, probably because contact is for a limited duration.

Schools also remain open as far as possible, with headteachers advised to close only classes and not the whole school when discovering Covid-19 cases.

Both the education minister and the president have repeatedly said they would be very reluctant to close schools completely again, citing the damage done to educational prospects among disadvantaged children of the three-month closure earlier this year.