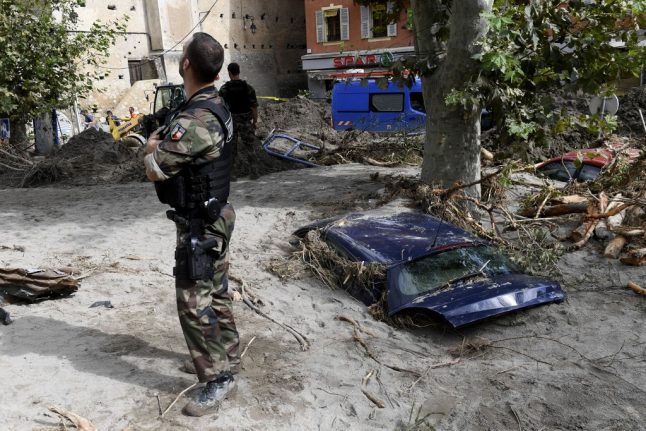 Two people have now been confirmed dead and eight are still missing after the storm which struck south east France and northern Italy over the weekend, with torrential rain triggering flash flooding and mudslides.

Two people have now been confirmed dead – a French shepherd whose body was found in the Roya river by Italian rescuers and a body found in Saint-Martin-Vésubie.

Two firefighters are among the missing, a captain and a young volunteer whose vehicle was 'swallowed up by the torrents of water' as they drove in convey to a rescue.

Their colleagues have described being unable to help them as their vehicle disappeared. “Everyone was driving slowly. They were being followed by equipment and teams specialising in water rescue,” Fabrice Gentili, the commander of the Alpes-Maritime rescue teams, told French media.

“The conditions were such that it was impossible for them to get into the water to help, they couldn't even see the car, which suddenly disappeared.

“As time elapses, we know we are unlikely to find people safe and well, and we search for everyone with the same priority.” A group of 11 hikers who had been numbered among the missing have since made contact, but eight people remain unaccounted for.

Around 1,000 firefighters and rescue workers remain in the area and crew say almost all of the villages cut off by landslides and floodwater have now been accessed.

The mayor of Nice, Christian Estrosi, says he hopes that everywhere will be accessible by road by the end of the week as a major operation begins to inspect and repair vital infrastructure. President Emmanuel Macron would travel to the region to offer moral support, his government tweeted on Monday.