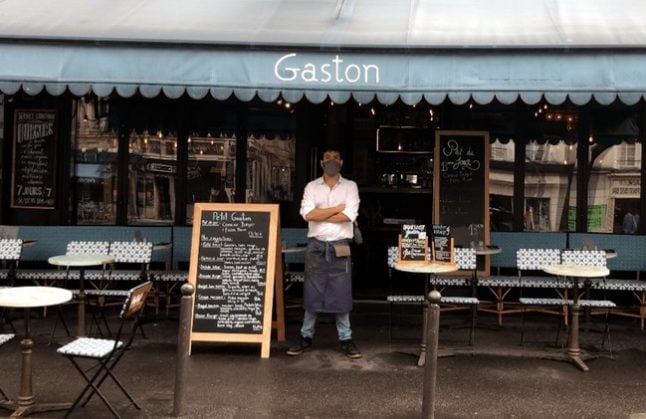 Ramon, 22 , is a waiter at Gaston, a brasserie in Paris. Photo: The Local
Anger has been mounting in the French bar and restaurant sector ever since the government launched its new Covid-19 alert level system last week, where the worst affected areas are ordered to close down bars and restaurants completely in a bid to halt the spread of the virus.
“The problem doesn't lie with restaurants, yet they are making us pay the bill,” said Alexis Dabanian, the owner of Gaston, a brasserie situated on the usually lively Place de Contrescarpe in the Latin Quarter, just south of the Seine.
Dabanian worried that he would soon have to close down his establishment completely for the second time this year, after Health Minister Olivier Véran on Thursday evening warned that the capital had surpassed the thresholds to be bumped up to a “maximum alert” level,
“We need a few days to confirm the trends, but if they are confirmed, we'll have no choice but to put (Paris) on maximum alert, from Monday,” Véran said.
EXPLAINED: How does France's Covid-19 alert system work?
That would mean that bars and restaurants in Paris and its petite couronne (the suburbs of Hauts-de-Seine, Seine-Saint-Denis and Val-de-Marne) likely would have to close down on Monday.
Six other French cities – Lille, Lyon, Toulouse, Saint-Etienne and Grenoble – were also put on notice of a possible maximum alert.
“If we have to close down, there will be many restaurants that won’t open again,” Dabanian told The Local.

Today @TheLocalFrance asked restaurant workers in Paris about how they feel about the government potentially closing them down over the weekend in a bid to slow down the spread of Covid-19 in the capital. Here’s a look at what they said. Thread. pic.twitter.com/iUw7T4NcrI

The Latin Quarter is usually a flourishing neighbourhood, its many bars, restaurants, bakeries and fast food shops full with both locals and tourists.
But Friday at lunchtime, Gaston's tables, like most restaurant tables enclosing the Contrescarpe roundabout, were empty.

“Normally, our tables would be full at this hour and it would have been impossible for me to have this conversation with you,” Ramon, 22, a waiter at Gaston told The Local while he gesticulated around to the empty restaurant.

Economy Minister Bruno Le Maire has repeatedly vowed that the government would not leave those hurt by the new rules behind, and promised to further bolster already existing help schemes to provide economic aid to ease the blows.

France has set up a dazzling €100 billion rescue package to boost the country's reeling economy and prevent the pandemic from provoking mass bankruptcies and layoffs by keeping long-term economic help schemes in place for struggling businesses.

The government also said the measures were key to stop the spiralling Covid-19 rates and ease the mounting pressure on hospitals in hard-hit areas, a position backed by several hospital spokespeople.

But the decision to target bars and restaurants specifically stirred up a deep-set discontent in the sector that predated last week's announcements.

France’s restaurant and bar owners were, along with the tourism sector, among those who suffered the most from the two months of strict nationwide lockdown this spring.

Prior to that, they saw their incomes drop during first the “yellow vest” protests every weekend –  especially in Paris where the biggest and most violent protests were held – and then during the transport strikes, which saw their customer numbers plunge in December 2019 and January 2020.

Northeast in Paris, in the 9th arrondissement, several hospitality sector workers participated in the protests.

But in the streets around Contrescarpe, no black sleeved protesters were to be seen and none of the restaurants The Local spoke to knew the protest was happening.

“I hadn't heard about it, but I really support the initiative,” said Paolo, the owner of an Italian restaurant in Rue de Mouffetard.

Paolo was angry about what he said was another blow to a suffering neighbourhood and sector, that was trying to do its best to adapt to the difficult circumstances.

“I just filled up my fridge and now I'll probably have to throw away all the food once again, just like I had to before lockdown,” he told The Local.

Paolo had opened his restaurant in February, barely a month before the strict, nationwide lockdown entered into effect in March. Since then, things had just gone downhill, he said.

“Honestly, I just hope we will survive this. But I think that in a few months a lot of establishments will have to close down for good,” he said.

Even after they could reopen their establishments in June, the restaurants around Contrescarpe continued to see their incomes affected by the absence of international tourists, he said.

“The bistros are suffering even more than us, we're doing a lot of fast-food and take-away so we're able to serve the students in the area.”

The government's solidarity fund will provide up to €10,000 per month for the establishments suffering from the new rules, but Paolo said even this would not enough to pay back the several months of rent that had piled on top of each other since lockdown (the hospitality sector has been able to postpone their rents temporarily and pay them back later).