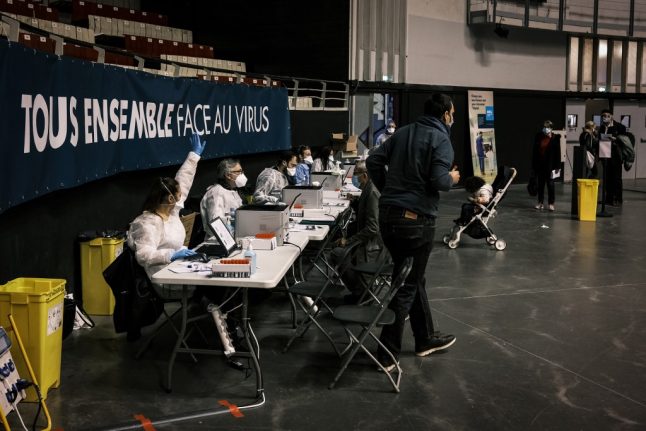 Lyon's sports arena has been turned into a giant screening centre, with health workers testing up to 700 people per day. Photo: AFP

The French government has now opened for individual use of the so-called antigen tests in a new decree, published on October 16th.

Antigen tests are nasal swab Covid-19 tests that provide results on the spot in roughly 15 minutes, much quicker than the traditional PCR nasal swab tests that take at least 48 hours to get back to the person.

Until recently, the antigen tests were only allowed for strategic use in France, such as speed-testing a whole group to check for cases after authorities had identified a cluster.

Faced with spiralling Covid-19 rates, the capital and several other cities struggle to keep up with the mounting pressure on testing facilities, which in France are mainly carried at either high-street laboratoires or labos or walk-in testing centres.

READ MORE: How and where to get a Covid-19 test in France

Extensive testing and tracing has been the cornerstone of France's policy to counter the spread of the virus ever since the country eased lockdown in May.

Despite having reached a set goal of 1 million tests per week nationally, many people have reported long queues at testing centres while delays in getting the results.

The combination of changing the recommendation for testing and increasing resources does seem to be helping, and the French health ministry has reported that 75 percent of people get their test results within 48 hours.

But the government wants to improve the process further, and during his nationwide speech to the nation last week, President Emmanuel Macron promised to “drastically reduce the delays” in testing.

What are antigen tests?

Antigen tests are similar to the regular PCR nasal tests, done by swabbing a Q-tip inside the nose to check for virus particles.

But, contrary to the traditional PCR tests, an antigen test does not require a lab analysis afterwards to get the results.

The antigen tests use a paper strip containing coronavirus antibodies that react when they touch the virus's spike protein, similar to how a home pregnancy test reacts to hormones.

In just minutes, a positive test will show up as a colour strip on the paper.

Why are they better than the regular tests?

The antigen tests are not better than regular PCR nasal tests in terms of accuracy, but they are quicker at presenting a result, which is crucial in the battle to reduce infections.

The tests were developed in France as part of a joint World Health Organisation project, in a bid to respond to surge in demand for Covid-19 tests.

Instead of returning home to wait for the result, a person can wait on site for 15-30 minutes to find out if they are positive.

The idea, according to Dominique Le Guludec, president of France's health council Haute Autorité de Santé, is to get patients who test positive to isolate as soon as possible.

“One case detected more quickly will allow for measures to reduce the risk of contaminating others,” she said.

Are there any downsides?

Yes, the antigen tests are less accurate than the PCR test, and they become less so the more time passes between the day of infection and the day of the test.

Antigen tests are at their best when an individual has a lot of virus in their nasal cavity, which is also probably the point at which they are most contagious.

Scientists have also spoken out in favour of using the antigen tests to mass test the population, so they can quickly identify invisible clusters ant track down transmission chains before they spread out of control.

The tests would help to “to eliminate the negatives,” Aurélien Rousseau from ARS Ile-de-France, the regional health authority in Paris, told French media.

French health authorities want to use them as a supplement to the PCR tests, not a replacement.

“The positives will then have to undergo a PCR test. This will allow us to save time, to shed light on blind spots for transmission,” he said.

So who will then get take these tests?

Are all health experts in favour of using them?

No, there has been a lot of discussion about the risks related to using the tests because of their decreasing accuracy with time.

The WHO says the tests should be administered “within the first 5-7 days following the onset of symptoms”.

However, some French doctors have warned that the test's accuracy drops severely already a couple of days following infection.

“The risk is that a patient, in the midst of illness, gets a negative result, which does not happen with PCR,”  Jean-Michel Pawlotsky, a virologist at the Henri-Mondor Hospita in Créteil, a Parisian suburb, told French media.

François Blanchecotte, President of the French National Union of Biologists, said the antigen tests “should only be used marginally, otherwise we will miss out on positives.”

You can see the main differences between the two tests outlined in the photo tweeted by Le Parisien below:

If taken at the right time, how accurate are they?

When the Haute Autorité de Santé approved the test on September 28th, they said in their statement that – like WHO – the minimum accuracy threshold of the tests were 80 percent.

The accuracy threshold refers to the probability that a test will return a positive result if a person is infected.

The threshold of precision in France should be above 99 percent, according the Haute Autorité de Santé – compared to the WHO's 97 percent threshold – meaning the chance that the virus detected is a different virus (like a regular influenza) than Covid-19 must be less than 1 percent.

France is also working on a saliva test, known as EasyCov, that also gives rapid results – an average of about 40 minutes.

It is being developed by France's National Centre for Scientific Research in partnership with two private companies and it is hoped that if trials are successful it will both speed the process and also entice more people to be tested, especially those worried about the invasive nasal swab.

Researchers say it would be ideal for situations that require rapid and repeated testing such as workplaces.