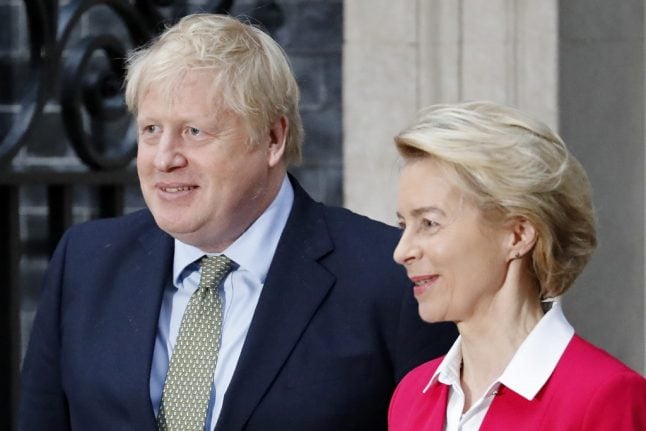 Ever since the UK government provoked anger in Brussels by admitting it was prepared to break international law to override parts of the Brexit Withdrawal agreement, Brits living in the EU have understandably become twitchy once again.

After years living in limbo, their rights and futures were eventually guaranteed by the ratification of the Withdrawal Agreement in January 2020.

The Withdrawal Agreement sets out the principle, with certain caveats, that British people who are already resident in the EU by December 31st 2020 can stay there.

As such it is a crucial document to the nearly 1 million British people who have made their homes in Europe – but the escalating row between London and Brussels over the document is making many nervous.

After the UK government put forward legislation that would give them the power to override parts of the Withdrawal Agreement, campaign group British in Europe said they had been inundated by queries from worried UK residents around Europe.

“We have been receiving anxious enquiries from our members about what a breach of the Northern Ireland Protocol could mean for the implementation of the citizens' rights chapter of the Withdrawal Agreement and for their futures,” said the statement.

“The Member States will rightly now question whether the UK will honour its obligations towards over three million EU citizens living within its borders.”

But how worried should Britons living in Europe be now that the row has escalated to the point where by the EU announced on Thursday it had launched legal action against Boris Johnson's government?

Firstly there is the question of how significant the launch of this legal action really is.

Seasoned commentators on Brexit and legal experts suggest the move by the EU, just like the UK government's controversial internal market legislation, is all part of a sideshow around the tense but ongoing talks to reach a trade deal.

“Ultimately this may be political theatre on the EU side, to match the UK. There are lots of 'off ramps' in an infringement proceeding – most of these cases are settled before they ever reach the CJEU. It's possible for the case to be dropped if the bill is amended as part of a deal,” said Steve Peers, Professor of European human rights law at the University of Essex

But ultimately this may be political theatre on the EU side, to match the UK. There are lots of 'off ramps' in an infringement proceeding – most of these cases are settled before they ever reach the CJEU. Possible for case to be dropped if the bill is amended as part of a deal.

In other words both sides are flexing their muscles to demonstrate they are prepared to walk away from talks on a trade deal, in the hope that it will push the other side towards accepting an agreement on their terms.

Can the Withdrawal Agreement be suspended?

But what about the law regarding the Withdrawal Agreement and resolving disputes between the two sides when they arise?

Under the Brexit divorce deal agreed and ratified by the UK and the EU 27,  if a dispute arises between the EU and UK over the implementation of the Withdrawal Agreement then it can be settled by a joint committee.

If the committee cannot resolve the row then an arbitration panel selected by each side will be set up.

This panel has the job of issuing binding decisions and if those rulings are not complied with, then potential penalties and sanctions could follow.

In a worse case scenario parts of the Withdrawal Agreement could also be suspended, but crucially the part relating to citizens' rights cannot be.

In an even more extreme scenario, experts believe the Withdrawal Agreement provisions are also protected under the Vienna Convention of the Law of Treaties, which means the UK or the EU 27 would not simply be able to terminate the treaty.

What is likely to be more of a real concern to Brits around the EU right now is not the legal wrangle or the fraught trade talks, it's the moves made by each EU country to enshrine the rights guaranteed by the Brexit agreement into national law.

There are no particular concerns that EU countries won't do what is necessary, even in France which has yet to start accepting residency applications for the 150,000 to 300,000 British residents.

But if issues do arise and there are disputes over citizens' rights then Brits in the EU do have some protection.

A special committee will try to resolve disputes and for the next eight years the Court of Justice of the European Union will continue to have jurisdiction over disputes involving citizens' rights in both the UK and the EU.

When it comes to implementing the Withdrawal Agreement the EU Commission has the job of closely monitoring the measures taken in each country.

The commission says: “The implementation and application of citizens' rights in the EU will be monitored by the Commission acting in conformity with the Union Treaties. In the United Kingdom, this role will be fulfilled by an independent national authority.

“The Authority and the European Commission shall inform each other annually through the Joint Committee established by the Withdrawal Agreement of the measures taken to implement and enforce the citizens' rights under the Agreement. Such information should include in particular the number and nature of complaints treated and any follow up legal action taken.”
But what about in reality?
While governments and the EU commission may genuinely be looking after the rights of Brits in the EU, there may however be problems at a more local level.
Brexit and its impact is understandably hard to get to grips with for business owners around Europe, some of whole may jump to the wrong conclusion that because Britain was leaving the EU, that meant British citizens had lost their right to work in the country.
This seems to have been the case in France where several people have reported job adverts either specifically limited to EU passport holders or stating that British applicants will not be considered.
And the confusion over the status of British people has already lead to some people being wrongly asked to supply extra paperwork in relation to employment, driving and receiving benefits.
These type of incidents will likely become more and more common and it will often be left up to individuals to explain our rights.
But all in all, Brits in the EU shouldn't worry too much about the impact the escalating spat between Brussels and London will have on their rights to stay in the countries they have made their homes.
But can the same be said for EU citizens in the UK?
“It's unlikely that there will be any push-back on citizens' rights from the EU side,” said Kalba Meadows from British in Europe.
“It's more a question of good faith (or lack of it) and the message that it sends to the EU that if the UK can't be trusted to honour one part of the Withdrawal Agreement, can it really be trusted to implement the citizens' rights parts?”