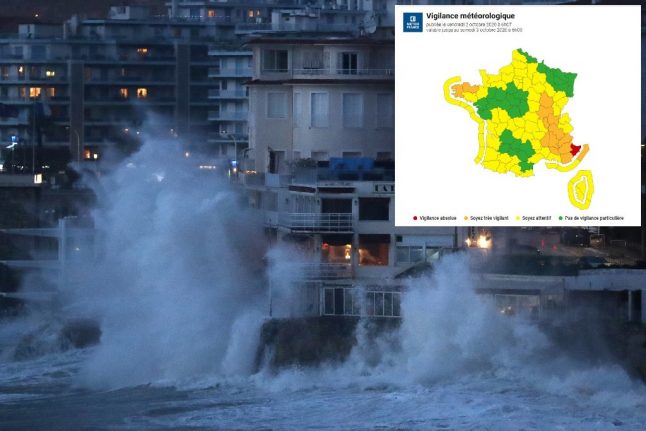 Thirteen départements are on a weather warning with one – Alpes-Maritime in south east France – on red alert, the highest level. Morbihan in Brittany was on red alert overnight but has now been downgraded.

Overnight Brittany saw winds of 186km/h and 80,000 people are without electricity. Emergency services say they were called to more than 80 incidents and trains in the area remain disrupted on Friday morning.

The storm is expected to sweep south and east, and the Riviera is also on high alert with schools closed on Friday because of forecast localised flooding.

The préfecture of Alpes-Maritime – which includes Nice – announced on Thursday afternoon that all schools would close on Friday, to avoid children getting trapped or have parents unable to come and pick them up.

“An active depression is shifting over the Provence-Alpes-Côte d'Azur region. We are associated with the dynamics of Storm Alex,” a weather forecaster told BFMTV. In Brittany Finistère and Côtes-d'Armor remain on orange alert.

On the Riviera and in eastern France Sâone-et-Loire, Côte d'Or, Ain, Rhône, Ardèche, Drôme, Isère, Hautes-Alpes, Vaucluse, Alpes-des-Hautes-Provence and Var are on orange alert, while Alpes-Maritime is on red alert.

The storm will, however, be relatively short-lived and good weather is forecast to return on Saturday.