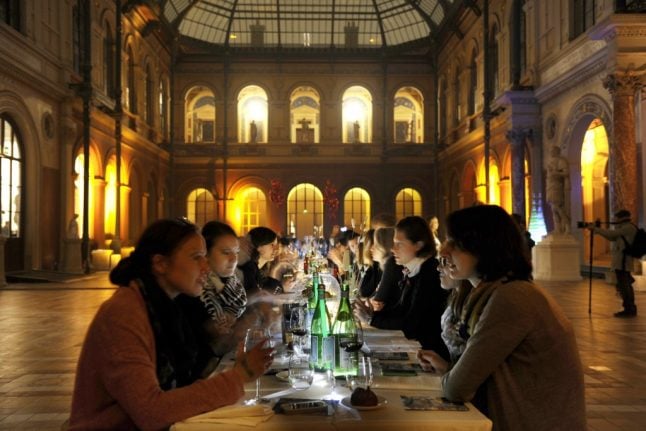 Only the size of your home limits how many people you can have round for dinner. Photo: AFP

As the pandemic has evolved several countries have brought in measures to try and limit social contacts in the private sphere – as opposed to public spaces like bars, cafés and cinemas.

The UK has the 'rule of six' where no more than six people are allowed to meet anywhere and has also brought in rules on households meeting, while Belgium went further and brought in 'social bubbles' – forcing people to choose just five friends or family members and limit their social interactions to those people.

But while France is bringing in increasingly strict measures around public spaces such as bars, restaurants and gyms, there are as of yet no rules on social contact in the home.

What is the rule?

France's Covid-19 strategy is a localised one, so areas that have higher numbers of cases have stricter restrictions – according to the government's 'shades of red' map.

In areas labelled high risk, public events such as sports matches have a 1,000-person limit (in low risk areas it is 5,000) and if you're in a public place such as a park you cannot be in a group of more than 10.

For private gatherings there is no rule, but there is advice.

France's health minister Olivier Véran, when announcing the new measures, also asked people to restrict gatherings as much as possible, saying people should not be having “multiple dinners” with family or friends.

The French Prime Minister Jean Castex has admitted he “cannot legislate” to limit the number of people in private gatherings in their own homes.

He also called on people to limit their socialising, telling France Info:

People in high risk groups such as the elderly or chronically ill are advised to limit their social contact as much as possible. Gatherings in public areas such as the banks of the Seine are now subject to a 10-person limit in some areas. Photo: AFP

What has been said about social bubbles?

The idea of une bulle sociale has been considered. Bruno Lina, a virologist and member of France's Scientific Council told French media that it was “on the table” for consideration at the Council's meeting in mid September.

However while some members of the Council were positive about the idea, they did not seem to convince the politicians who ultimately decide on which measures to bring in.

Several other scientists also pointed to confusion and resentment in neighbouring Belgium over the social bubble rules, as well as confusion over the rules in the UK.

Many people have also raised the issue of privacy and worry over the idea of policing what people get up to in their own homes.

When France emerged from lockdown in May this was a gradual reopening with many restrictions in place including – initially – a 10-person limit on gatherings in both public and private spaces. However when the full decree was published by the Constitutional Court it added a clarification that the limit cannot be imposed on private gatherings in residential premises.

Since this legal challenge, the French government has not attempted to impose any further restrictions on private gatherings, but concentrated on gatherings in public spaces like parks and beaches or in bars and restaurants.

The latest guidance from the Préfecture de Police in Paris specifies that “gatherings of a private nature in homes cannot be banned” but adds that the police chief backs recommendations for people to limit their social lives.

France has also seen strict enforcement of many of its restrictions – at the height of lockdown police were stopping people in the street to check that they had the necessary permission forms to be outside and nearly 1 million fines were issued to people who were breaking lockdown rules.

READ ALSO Having an affair and walking a snake: France's weirdest excuses for breaking lockdown

More recently, police are also patrolling in the cities and handing out fines to people who are not wearing masks and extra police have been deployed to ensure that rules on bar closures are followed.

Policing how many people are at private dinner parties, however, is much more difficult and this may be another factor in the government's decision to make socialising in private a subject for advice, rather than an order.

However the advice to cut back on socialising now includes a warning that if the situation does not improve, we may all be heading back to lockdown.

READ ALSO ANALYSIS: Is France likely to go back into lockdown?