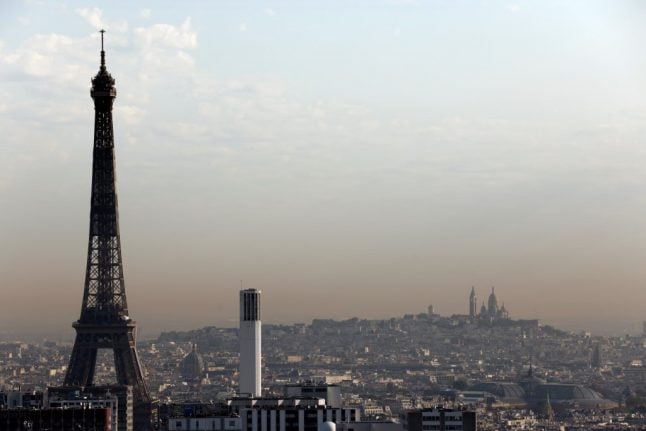 The noise was heard at about 12 noon and could be heard right across the city and into the suburbs, with hundreds of people taking to Twitter to ask what was going on.

People living in the central parts of the city also reported feeling the ground tremble and seeing their windows shake.

Some sort of explosion or very loud bang just heard in central Paris. No idea what it might have been pic.twitter.com/byk0IIw7uF

Across the city people stopped in the streets and shouted out to their neighbours to ask what was happening.

Everyone in Paris and surrounding area seems to have heard this “boom” a few minutes ago. People looking out of windows in every arrondissement. What was it?

The noise was also heard at Roland Garros stadium, where the delayed French Open tennis tournament is underway.

Explosion in Paris heard from games at Rolland Garros pic.twitter.com/3eVhSLrXQQ

In a city scarred by repeated terror attacks, including a knife attack outside the former Charlie Hebdo offices just six days ago, many people's thoughts turned initially to a bomb.

But in fact Paris police have confirmed that the noise was caused by a sonic boom from a passing plane.

For those in the Paris area who heard a very loud noise, the Préfecture de Police confirm that it was not an explosion but a fighter aircraft breaking the sound barrier. They appeal to people not to phone their emergency numbers about this ? https://t.co/ATX6rBqtTD

The boom was apparently caused when the fighter jet breaking the sound barrier as it passed over Paris, and police have asked people to stop calling them to report the noise.

Paris is normally a no-fly zone for military jets, which is why the noise took so many people by surprise, but the Armed Forces minister Florence Parly confirmed that the jet was taking part in an “intercept mission” when it broke the sound barrier.

Paris 'boom'. An RTL colleague explains it was a Rafale (fighter jet) that took off from Saint-Dizier (air base) in Haute Marne after air traffic control lost contact with a civil aircraft. (Allowed to overfly Paris in exceptional circumstances). Broke sound barrier at 11.57am. https://t.co/lf5XE5Bd3m

It was reported that the jet was dispatched to intercept a passenger plane which had lost contact with aviation authorities. In this circumstance, dispatching a military plane to intercept the aircraft is normal practice.

“A Rafale, carrying out an intervention to assist an aircraft that had lost contact, was authorised to break the sound barrier to reach the aircraft in difficulty,” a French air force spokesman told AFP.

No detail was given on the type of aircraft or the nature of its difficulty. The spokesman said the fighter emitted its sonic boom over the east of Paris.

France's DGAC civil aviation authority played down the seriousness of the incident, saying that a plane made by Brazil's Embraer had suffered “a loss of radio frequency” while flying over the west of France but that contact was re-established.

It explained such situations take place “regularly,” In 2019, the French air force counted 450 abnormal aviation situations, 210 of which needed intervention by fighter jets or helicopters.

Paris is only a no-fly zone below 2000 ft altitude. I see aircraft flying over daily, they are just higher than that. It is controlled airspace, i.e. the pilots fly exactly as air traffic control instruct. If no response to ATC radio calls, fighter jets get sent up in a hurry.

Those who live in French countryside where fighter jets flying in the skies above are more common, would probably not have been so panicked by the noise.

If you spend time in parts of France such as Brittany, you'll hear French fighter jets breaking the sonic boom at approx 1240 kmph most days. Paris is a no-fly-zone (a few occasional exceptions) so a sound barrier breakage makes instant headlines.

According to the North American Space Agency: “A sonic boom is the thunder-like noise a person on the ground hears when an aircraft or other type of aerospace vehicle flies overhead faster than the speed of sound or supersonic.

“Air reacts like a fluid to supersonic objects. As objects travel through the air, the air molecules are pushed aside with great force and this forms a shock wave much like a boat creates a bow wave. The bigger and heavier the aircraft, the more air it displaces.”

And Nasa says: “An aircraft flying supersonic at 50,000 feet can produce a sonic boom cone about 50 miles wide,” which is why so many people around the French capital heard it.