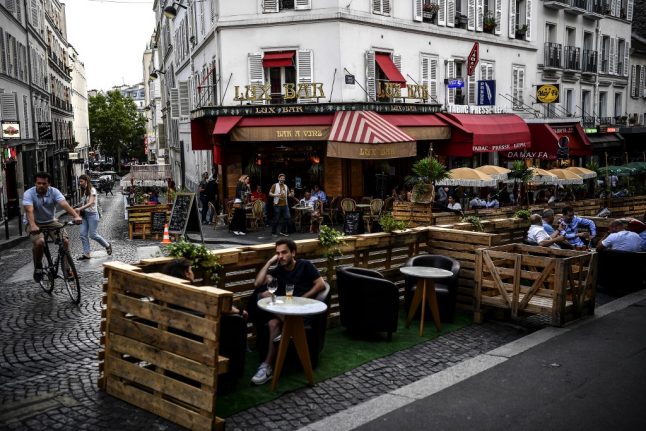 Bars in Paris are already required to close at 10pm. Photo: AFP

Health minister Olivier Véran on Thursday morning was set to met with the mayors of Paris, Lille, Lyon, Grenoble and Toulouse, to decide what kind of measures to take to halt the spread of Covid-19 in their cities.

Overall in France the situation continues to deteriorate with over 12,000 new cases reported on Wednesday and another 64 deaths. Hospital numbers continue to creep up with 1,200 patients in intensive care.

These cities were those suffering spiralling Covid-19 rates and increased pressure on hospitals in their areas, especially the capital.

In an attempt to avoid another nationwide lockdown, the French government has brought int a system of local health restrictions.

Each area of France is given an alert level – no alert, alert, heightened alert or maximum alert – on the government's risk map and each alert level brings with it restrictions on daily life.

At the bottom end of the scale is the restriction of the number of guests at a wedding to 30 while the 'maximum alert' designation brings with it a raft of measures including closing all bars, restaurants, gyms and sports centres and limiting public gatherings to 10 people.

At present only one area of France is on maximum alert – the metropole of Aix-Marseille – but latest data shows that Paris appears to be in danger of tipping over to maximum alert as well.

The capital and its inner suburbs are currently on heightened alert, which means bars close at 10pm, gyms and sports centres are closed but swimming pools remain open and public gatherings are limited to 10 people.

The decision on which alert level to give an area rests with the government, and is reviewed weekly. The health minister is set to hold a conference on Thursday evening.

There is speculation Veran will announce new restrictions for Paris and other cities although BFM TV claimed government sources had made it clear that the alert level would not be raised to maximum in certain cities.

The government believes it is too early to raise the level given it only introduced measures such as early bar closures last week, BFM TV claimed.

Instead Veran would issue a “message of alert” to the French public, that if the situation does not improve more restrictions on daily life will follow, sources said.

However we know from recent experience that the government could change its mind at the last minute.

France's new alert system, revealed last week, is based on three criteria; number of cases, number of cases among vulnerable groups and the situation in hospitals.

Case numbers in over 60s – One trend that has been obvious from the beginning of the pandemic is that age is a major risk factor and older people are much more likely to develop serious symptoms and require hospitalisation or intensive care. For this reason particular attention is paid to the age profile of new cases. In Paris there were 132 positive cases per 100,000 of those in the 60-69 age group on Tuesday. The government threshold for passing into the maximum alert category is 100.

Situation in hospitals – officials look at the situation in an area's hospitals and the level of pressure they are under. In Paris several medics have sounded the alarm in recent days and the area has begun to cancel some non-urgent surgeries as hospitals fill up.

Of particular concern is the situation in intensive care units, which were at breaking point during the first wave of the epidemic.

Their press office told The Local that they only provide numbers on a regional level, not on a local level.

However French media have reported that the ICUs in the city itself has kept their rate down at around 30 percent because hospitals in the city send patients to other establishments in the region to avoid overwhelming their capacity and seeing hospitals having to reschedule surgeries.

Paris and the suburbs

At present Paris' heightened alert level is for the city itself and the petite couronne – the three surrounding départements of Seine-Saint-Denis, Val-de-Marne and Hauts-de-Seine.

The latest data available shows that the infection rate is significantly higher in Paris itself than in its suburbs. While the Paris infection rate stood at 252 on Tuesday it was only 154 in the wider Île-de-France region (although still a lot higher than the 104 average in France).

However designations are generally done on a 'metropole' level, which in Paris means the city and the petite couronne.

EXPLAINED What is a French metropole?

Paris City Hall judges that the city has exceeded two out of three of the criteria, but the ultimate decision lies with the government and the status of Paris is expected to form part of health minister Olivier Véran's weekly briefing, scheduled for Thursday evening.