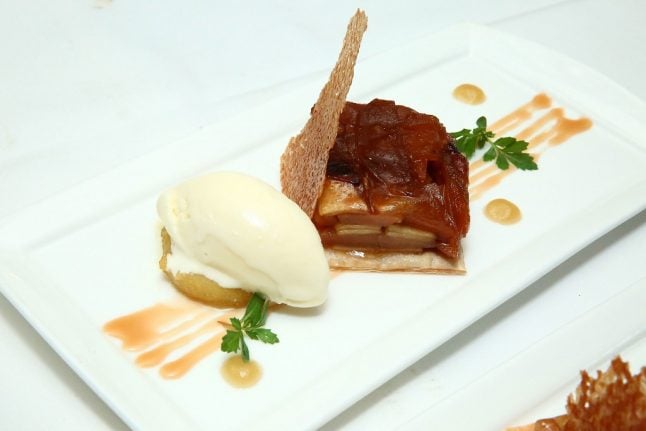 In good news for non-cooks, buying your desserts at the patisserie is actively encouraged and if you visit any bakery at the weekend you will see French people leaving with large cardboard boxes containing the dessert they intend to serve at their dinner or lunch party.

But for people who enjoy getting stuck in in the kitchen, here are some French classics that are delicious, timeless and low calorie. (We’re joking about the low calorie bit obviously, but you can always go for a run later).

This caramel and apple upside down tart was invented by accident, so the legend goes, at the Hotel Tatin but has stuck around because it’s delicious and hearty with its simple combinations of apples (although pears can be used too), caramel and pastry.

The recipe itself is fairly simple, but involves making caramel so shouldn’t be attempted if you have young children in the kitchen, and you do need a pan that you can cook the caramel in on the stovetop and then put in the oven to bake the pastry. Literally translated as ‘burnt cream’ this is nicer than it sounds, a silky smooth custard with a topping of caramelised sugar. Serve these in individual pots for your guests and let them have the fun of breaking through the caramel crust with their spoon.

This ‘floating island’ dessert is a beautiful combination of a creamy set custard and a topping of fluffy poached meringue. Serve them in a cocktail glass if you’re looking for an elegant appearance.

It is perhaps with tarts that France really excels itself and there are dozens of different varieties from the simple apple tart to the delicious and sticky tarte aux noisette.

This recipe is for probably the most common kind – a pastry case filled with crème patissière and topped with glazed fruit. This is great for gardeners wanting to show off their latest fruit crop as your homegrown strawberries/raspberries/whatever really get to be the star of the show on top of the tart.

This dessert originates in the Limousin area, but is now popular across France. It is usually made with cherries, but recipes for plums, pears and rhubarb that are equally delicious. Served warm with cream, ice cream or (if you feel like Anglo-French fusion) custard, it’s particularly good for cold nights. While making choux pastry is not the simplest technique, once you’ve got the knack you can start creating profiteroles, éclairs and many variations.

This recipe is for a simple profiteroles with chocolate dessert, but if you’re feeling ambitious you could sculpt your profiteroles into a towering croquembouche, the traditional centrepiece for a French wedding.

Crèpes are of course good at any time of the year, and can be served with sweet or savoury accompaniments, but France has a special day for eating crèpes – la chandeleur – which comes with a whole pack or weird and wacky traditions.

For dessert popular toppings include fresh fruit, lemon and sugar (with optional liqueur) or the French favourite – Nutella.

This cake is traditionally eaten on epiphany – January 6th – and also has some fun traditions.

The cake is of course great at any time, but if you’re making it for the epiphany festival don’t forget to include the magic bean which determines which family member will get all the luck in the coming year.

This is of course by no means an exhaustive list, so please feel free to share your dessert suggestions and recipes at [email protected]

Wine is a pretty popular product all year round, but as soon as the sunny days arrive, the shelves of your local cave or supermarket will be filled with rosé.

Rosé wines sometimes get a bad reputation abroad, but there are plenty of excellent vins rosé in France, especially the ones from the rosé heartland of Provence, the majority of which are dry, not sweet.

It’s often served as a pre-dinner drink (an apéro) but it also pairs well with food so you’ll see it on restaurant wine lists.

Rosé wine is not a mix of red wine and white wine, instead it’s made from red wine grapes but using a different technique in which the skin of the grapes is removed earlier, meaning that the skins do not impart their red colour to the wine. Rosé is in fact the oldest wine type in France – the ancient Romans produced wine using the rosé technique in Provence.

If you’re not a rosé fan, why not try a spritz as the temperature rises? Spritz refers to any drink that is a combination of wine (usually sparkling wine), soda water and an apéritif drink. They’re served long with lots of ice so make a refreshing and not too strong drinks option in the summer.

The classic spritz is the Apérol spritz – made with Apérol, sparkling wine and soda water, usually garnished with a slice of orange. Although ubiquitous in France, Apérol is actually Italian (its name comes from aperitivo, the Italian word for pre-dinner drinks).

There are lots of other options though – Campari Spritz, with the bitter-but-delicious Italian Campari.

Lillet spritz – the French aromatised wine Lillet is often served as a spritz, garnished with mint or cucumber.

Saint-Germain spritz – the elderflower liqueur Saint-Germain is often found served as a spritz in the summer, garnished with fruit.

French beer culture is rapidly changing and there are now more and more options available if you want to drink beer in France.

The traditional demi (half litre) of French of Belgian beers are still widely available, but craft beers are also really taking off, especially in northern France.

A combination of imports from the UK and US, plus an ever-increasing number of small craft breweries in France mean there are lots of craft ales on offer now, from IPA to stout. It’s also getting more common to serve beer as une pinte (a pint).

READ ALSO How France became a nation of beer lovers

Non-alcoholic beers are also increasingly common in France and most of the big-name brands such as Kronenbourg, Grimbergen and Pelforth now have a zero-alcohol option. Ask for une bière sans alcool, or if you want want a summer shandy (beer mixed with lemonade) ask for a panaché.

If you’re looking for something non-alcoholic, the classic pressé is a good option.

The most common option is a citron (lemon) pressé, but many cafés have other fruit options. Keep in mind this isn’t exactly a lemonade – if you’re looking for this you can ask for a citronade.

The classic pressé is served as a neat squeezed juice, served with a jug of water and (in the case of the lemon) a couple of sachets of sugar, so that you can mix the juice to your own taste.

But aware that soft drinks are not necessarily cheaper than alcoholic ones in France, and a citron pressé will often be more expensive than buying a beer or a glass of wine.

Of course staying hydrated is vital as the temperature rises, and there’s no better option for your health than water.

In cafés and restaurants if you simply ask for ‘water’ you’re likely to be brought mineral water and this can be more expensive than beer or wine, especially in tourist areas.

If you just want tap water ask for une carafe d’eau or un pichet d’eau, which is free.

Tap water in France is entirely safe to drink and the city of Paris is currently running a campaign called Je choisi l’eau de Paris (I choose Paris tap water) to encourage people to cut down on plastic waste by ditching bottled water and drinking tap water instead.

If you see a Je choisi l’eau de Paris sticker in the window of any business, it means you can go in and get your water bottle filled up for free.

Most French cities also have a network of drinking fountains where you can stay hydrated for free during the summer months.