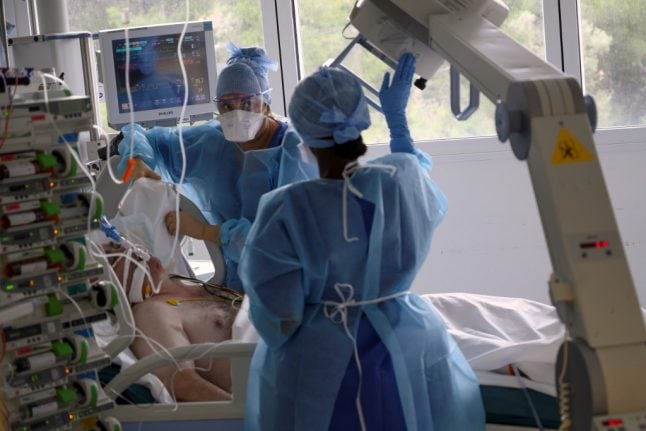 Hospitals across France have reported an increase in new Covid-19 patients the past few weeks. Photo: AFP

France's Covid-19 hospital numbers continued to increase on Monday – although figures are often higher on Mondays as some cases are under-reported over the weekend – as public health agency Santé Public France confirmed 4,069 new Covid-19 patients in one day.

Of these, 137 were patients ill enough to be admitted into intensive care units.

In total, France's hospitals in Monday counted 6,397 patients, of which 1,558 were in intensive care units.

While representing a large increase since this summer, the numbers were low compared to the over 32,000 hospital patients registered at the height of the pandemic in mid April.

Here is another French Covid update. There have been 6 days of stats since my last thread. Individual days can be misleading. I have crunched the numbers for 7 days to give a sense of the trend – which remains worrying but nothing like as explosive as it was in late March. 1/10

But authorities remain wary of the past few weeks' rapid rise, especially in hotspot areas such as Paris and the other 11 “high risk” cities.

In the southern port city of Marseille, the hardest hit area in the Bouches-du-Rhône département which has the most intensive care patients in the country (120), bars and restaurants were ordered to close their doors on Sunday, as part of new government measures to attempt to limit the spread of the virus before hospitals become overwhelmed.

In the capital, where bars had to shut their doors at 10pm on Monday as new restrictions came into force, hospitals told French media that they would have to start to reschedule planned surgeries due to the increased Covid-19 patient flow.

“The number of beds dedicated to the care of other patients is shrinking and we still haven't got to the winter season, where usually all intensive care services are saturated by patients with respiratory difficulties due to influenza, etc,” Bruno Megarbane, who heads the intensive care units at the Paris Lariboisière hosptial told BFMTV.

Paris and its suburbs were particularly hard hit by the virus' first wave of infections in March and authorities remain wary of the current situations as infections flare.

In the greater Paris region Ile-de-France, the incidence rate was 156.8 new Covid-19 cases per 100,000 inhabitants on Monday.

That means the capital is approaching the government's threshold to qualify as an area on “maximum alert,” the second highest level in the alert system the French government created to clamp down on the accelerated spread of the virus across the country.
The decision to place an area on maximum alert is taken by the government and is based on several factors.

The third criteria to be classed as an area on “maximum alert” is the situation in an area's hospitals – including having more than  30 percent of hospital beds taken up by Covid-19 patients.

In maximum alert areas all bars and restaurants have been completely shut down for a minimum period of two weeks.

Only Marseille and overseas territory Guadeloupe were labelled “maximum alert” areas when health minister Olivier Véran presented the new system last Wednesday, however the situation will be reviewed weekly and Paris has seen numbers deteriorate this week.

In Marseille, some bar and restaurant owners defied the new rules on Monday and kept open at the risk of being fined.

Some restaurants in Marseille are keeping open despite new rules requiring them to close as of today. The newest kind of French rebellion is having un café en terrace! https://t.co/rkJuIX8KqF

In Paris, some gyms – which also had to close down in all the 11 cities on “heightened alert” – also refused to close their doors, saying the government's targeting of their business was unfair.

Restaurants in the capital can keep open later than 10pm as long as they do not serve alcohol without meals. If the capital gets bumped up one alert level, all bars and restaurants must close down completely for at least two weeks.

The government will review the situation on Wednesday.