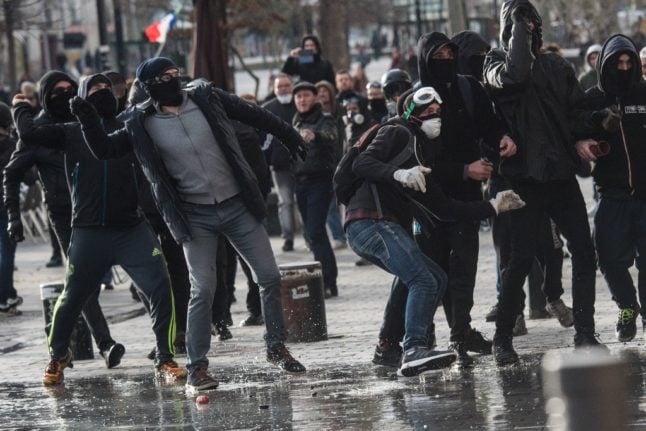 Black bloc in Nantes at a protest over the goverment's planned pension reforms. Photo: AFP

These violent trouble-makers became a staple of the weekly 'yellow vest' protests that rocked France, causing thousands of euros of damage, particularly in Paris.

But now action has been taken – on their name.

They are not an official organisation and the name came about because of their habit of dressing generally in black, but what is troubling France's Commission for the Enrichment of the French Language, which falls under the Prime Minister's remit, is the fact that the name is in English. The commission has therefore decided to rebrand them as 'bloc noir'.

The change has been approved by French language guardians Academie Française and published in the Journal Officiel, the state journal which publishes new decrees and laws.

The Commission added that the term cagoules noir (black hoods or balaclavas) can also be used to describe them.

Although the bloc noir were frequently seen on 'yellow vest' demonstrations, their actions are not limited to this cause and they pre-date to existence of the 'yellow vest' movement that swept across France from late 2018.

They were also seen at demonstrations during France's mass transportation strikes in December 2019 and January 2020 and often turn up as the march is ending and begin smashing bus shelters, setting fire to street furniture and engaging in running battles with police.

The French police and government tend to refer to them as casseurs – rioters or hooligans – to distinguish them from people who are peacefully exercising their right to demonstrate. However casseurs is a less specific term that also includes other violent protesters who do not belong to the black bloc movement.