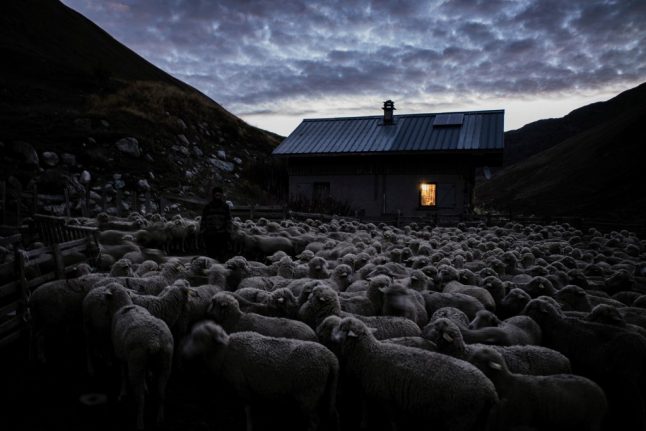 A French shepherd watches over a flock of sheep in the mountains near the Col du Glandon, in the French Alps, in 2018. Illustration photo: AFP

The storm struck the Col du Glandon pass, east of Grenoble, on Friday evening, dropping up to 50 centimetres of snow on pastures where sheep usually stay until late October.

“Some 1,000 animals belonging to one farmer were evacuated Sunday. There are still 6,000 belonging to another farmer, of which 1,000 were taken out today,” said Christian Frasson-Botton, a municipal councillor in nearby Saint-Colomban-des-Villards.

The rest of the sheep will be evacuated in the next days.

Local authorities also brought in six tonnes of feed over the weekend after snowmobiles were able to clear a path through roads that had become impassable.

But already the sheep were finding grass on slopes blown clear by the wind, Frasson-Botton said, though perilous weather is again forecast for later this week.

French public weather agency Méteo France predicted temperatures to drop later this week, falling down to 0C in some areas near the Swiss border in the Savoie département where the village is situated.

“We're no longer facing an emergency but it might not last… the weather turns quickly in the mountains,” he said.

While the Alps often see snow as soon as September, the amount over the weekend was “pretty exceptional – in the village they're saying it's the most since 1974,” Frasson-Botton said.