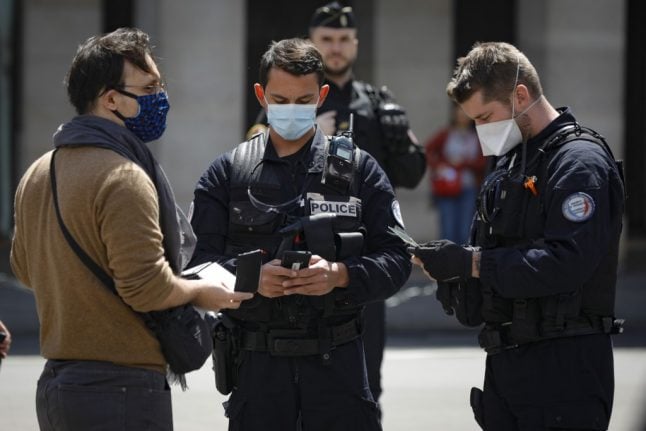 Are we heading back to the days of police checks and permission forms to leave the house? Photo: AFP

Until the last few days Emmanuel Macron, Jean Castex and members of their government insisted that a second nationwide “confinement” would be economically and socially and educationally catastrophic. It must be avoided at all costs.

The government’s tone has changed somewhat, despite the tough, regionally-varied restrictions imposed last week. The Prime Minister, Jean Castex, said on France 2 TV last Thursday that the country could face the same kind of crisis which forced the first Covid-19 lockdown in March if people did not start to behave more responsibly.

The health minister, Olivier Véran, said last Sunday that the government “does not want to close down the country” but tougher, nationwide restrictions for the late October school holidays or Christmas “could not be excluded”.

READ ALSO Will Macron's €100 billion rescue plan be enough to save France? A group of seven senior doctors wrote in the Journal du Dimanche that harsh measures were needed immediately if France was to avoid a second wave of the virus which would be worse than the first. On present trends, they claimed, the number of Covid patients entering intensive care would match the late March-early April peak – about 650 a day – by the end of October and “could reach 1,200 a day by mid-November”.

These figures are rather odd.  I will come back to them later.

In any case, many other senior doctors and epidemiologists  have a contrary opinion.

The virologist Vincent Enouf, deputy head of respiratory viruses at the Institut Pasteur, says that “numerous” medical experts believe it would be wrong to shut down France again. He urges the government to remain “hyper-flexible” and wait to see if the new regional restrictions have their effect before doing anything drastic.

In other words, the Government should wait and see – which is exactly what it has been doing since the virus revived in August. After last week’s announcement of grey, pink, red and crimson zones – no-alert, alert, heightened alert, maximum alert – there  is at least some kind of nationwide strategy.

From early August until last week, the government had drifted. It largely ignored the signs of a resurgent epidemic and concentrated instead on its €100bn recovery programme and the need to avoid an economically – and politically – disastrous depression this winter.

The French testing system, although now dealing in theory with 1,000,000 cases a week, proved slow and cumbersome.

Much of the French population also switched off. We took a holiday from the virus.

Social distancing measures were flouted, not by everyone but by many people and not just the young. The 14-day quarantine rules for those in contact with the disease were widely ignored.

This was partly a failure by the government but it was also partly the fault of those who ignored the advice.  Other countries appear not to have this problem. No, it wasn’t just the Germans who were more disciplined; also the Italians.

All of that being said, I believe that the virologist Vincent Enouf is right and the “seven senior doctors” may be wrong  –  unless they know something they are not telling us.

If you crunch the Covid-19 figures, there is nothing (yet) which resembles the precipitous rise in acute cases seen in March.

This is no longer an “epidemic without sick people”, as it was described in August. The numbers of hospital and intensive care admissions are rising – alarmingly in some cities, such as Marseilles.

But there is no explosion in demand for hospital and ICU beds as there was from mid-March to early April. The heath minister, Mr Véran, said as much when he appeared on the RTL-LCI-Le Figaro “Grand Jury” news show on Sunday.

“At this moment, we are faced with a saturation in demand for hospital care in no part of national territory,” he said. “The profile of the epidemic is nothing like the peak of the crisis last Spring.”

It is difficult to see where the “seven doctors” get their apocalyptic numbers from.

In the last three calamitous weeks of March, the number of Covid-19 patients entering intensive care in France rose from an average of zero a day to 630 a day.  In other words, it exploded. The ICU population peaked at 7,200 in early April.

The new spike in Covid cases is now eight weeks old. The number of new ICU entrants daily has risen from 29 (in early August) to an average of 91.8 (the last 7 days). This is worrying. It is not exactly an explosion.

The net ICU population of Covid patients has risen by 199 in the last week (allowing for those who left intensive care, either cured or deceased). The net increase in the previous week was 207 and 130 in the week before that.

There are now 1,118 Covid patients in intensive care, compared to just over 400 in early August.

These figures partly reflect increased testing but by no means entirely. In the last three weeks, the positive rate for tests has increased from 5.2 percent to 7.2 percent.

This is disturbing. The government is right to want to bring the curve of infections under control. But so far (and maybe the worst is still to come) the resurgence of the virus has not resulted in an equivalent boom  in acute cases and deaths.

In March and early April, Covid deaths in France rocketed from zero to over 1,000 a day in the space of three weeks. In the last eight weeks they have risen from about a dozen a day to 63.1 a day (average of the last week), compared to 43 the week before and 31 the week before that.

Frankly, I do not pretend to know what these figures mean. Maybe a big explosion is coming. Maybe, the virus will become more deadly again as the weather grows colder.

The government – after a dozy spell – is attempting a hazardous balancing act between caution and scaring people into behaving better. It is probably right to crack down on some places but NOT to close down the whole country.

As the virologist Vincent Enouf suggests, over-reaction might be worse than inaction. Better Enouf than too much.