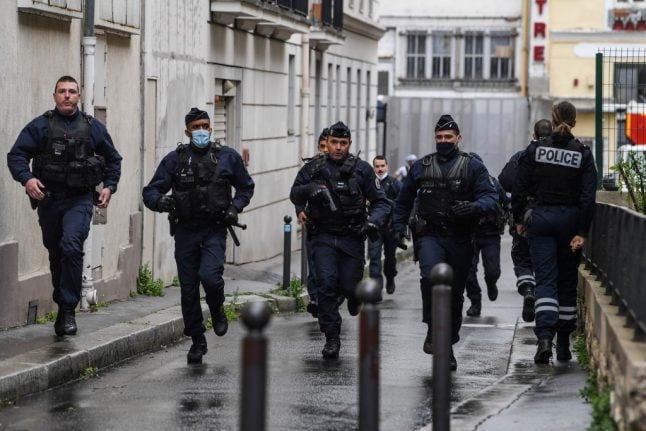 Police say a suspect has been arrested and they are not seeking anyone else. Photo: AFP

The attack occurred as the trial was underway for the alleged accomplices of the 2015 Charlie Hebdo attack.

French anti-terror police have taken charge of the investigation.

One person, described by police as the “main author” of the attack was arrested in the Bastille area of the city and no other suspects were being sought. The suspect was known to police and had a criminal past, according to reports.

A second person was later arrested in connection with the attack in the same area. It was not immediately clear why the second suspect was held.

It was initially reported that four people had been injured, two seriously, but police later corrected this information and said only two people – a man and a woman – had sustained injuries. Their condition was reported as serious but not life-threatening.

The two injured, a man and a woman worked for a documentary production company named Premieres Lignes.

They were smoking in the street outside their office, which was also once home to the satirical newspaper Charlie Hebdo when the attacker approached and assaulted them with a blade, prosecutors said.

Luc Hermann from Premieres Lignes told BFM TV that staff were left traumatised by the “extremely violent” attack. He said the company had not previously been subject to any kind of threat.

A reported suspicious package found near the scene was also examined but proved not to be sinister. Two of the injured were reported as being in a serious condition. Photo: AFP
The public were told to avoid the area which was the scene of a huge police presence.

Schools in the 11th, 3rd and 4th arrondissements went into lockdown with all children kept inside the area was secured. Later on Friday parents were told they could pick up their children.

The magazine's office was the scene of a terror attack in 2015 in which 12 people were killed by Islamic extremists. The attack happened on Rue Nicolas Appert, which is the site of a memorial to the murdered journalists and cartoonists. Photo: AFP

The stabbing came as a trial was underway in the capital for alleged accomplices of the authors of the January 2015 attack on Charlie Hebdo.

Twelve people, including some of France's most celebrated cartoonists, were killed in the attack by brothers Said and Cherif Kouachi and claimed by a branch of Al Qaeda.

The 14 defendants stand accused of having aided and abetted the perpetrators of the 2015 attacks, who were themselves killed in the wake of the massacres.

The magazine, defiant as ever, had marked the start of the trial by republishing hugely controversial cartoons of the Prophet Mohammed that had angered Muslims around the world.

Al-Qaeda then threatened Charlie Hebdo with a repeat of the 2015 massacre of its staff.

The trial in Paris had resumed Friday after a suspect's coronavirus test came back negative.

The hearing for the fourteen suspects, which opened on September 2, was postponed Thursday after Nezar Mickael Pastor Alwatik fell ill in the stand.

His lawyer Marie Dose said her client had suffered from “a lot of fever, coughing, vomiting and headaches”.

He was back in the box on Friday, after the presiding judge informed defence and prosecution lawyers by SMS late Thursday that the test results allowed for the trial to go ahead.