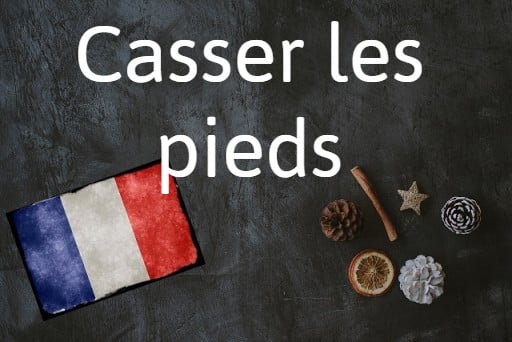 Why do I need to know casser les pieds?

Because it’s one of those expressions that is not what it sounds like.

The verb casser means to break while les pieds are feet, but this popular expression actually means getting on somebody’s nerves.

When you hear, je ne peux plus voir Jean, il me casse constamment les pieds, it means “I can’t stand Jean anymore, he is constantly annoying me.”

According to French dictionary website L’Internaute, the expression comes from the 19th century where casser was understood as écraser (stepping on), which is, indeed, super annoying.

The expression can also be turned into a noun or an adjective. A case-pieds is someone who’s very annoying, we could even say it’s someone who is a pain in the neck.

It's a familiar and slightly slangy expression so probably inappropriate for your next work presentation, but certainly not offensive.

READ ALSO: 11 phrases that will let you complain like the French

Tu me casses les pieds à toujours vouloir avoir raison – The fact that you always want to be right is getting on my nerves.

Cet enfant est un vrai casse-pieds ! – This child is such a pain in the neck!

Faire la vaisselle me casse les pieds – Doing the dishes annoys me much.