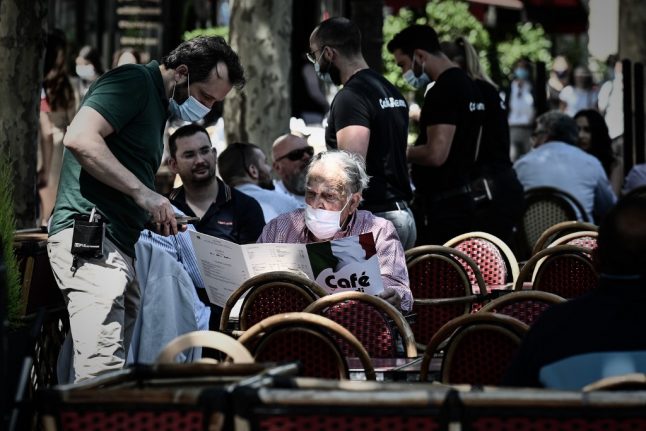 Bars across 11 French cities will from Monday have to close their doors at 10pm as part of a series of new government restrictions that aim to halt the rapidly growing spread of Covid-19 across the country.

In the southern port-city Marseille and neighbouring Aix-en-Provence, which is currently suffering the most from high Covid-19 rates – both bars and restaurants must close down completely for two weeks as of Saturday.

This period could be extended if the health situation required, the government said.

Health minister Olivier Véran made the announcement on Wednesday evening in a live speech to where he said swift action had to be taken to halt the deteriorating situation across the country.

The decision to close down bars and restaurants in Marseille was met with anger by the city's Mayor Michele Rubirola, who tweeted that the health minister's speech had left her “astonished and angry”.

“The Marseille city hall was not consulted. Nothing in the health situation justifies these announcements,” Rubirola said.

Marseille is not happy with having to close down bars and restaurant as of Saturday, and the Mayor says they “were not consulted” before the government made the decision. https://t.co/REzyhai139

The health minister retorted that the new measures were necessary to “protect the people of Marseille,” where the last two week's rapid increase in new Covid-19 hospital admissions has seen intensive care units strained for the first time since the spring.

“All the health indicators are degrading,” Véran wrote in a tweet.

Big row on Twitter between French minister and local officials in Marseille who are angry at govmt's closure of bars and restaurants. Very different to 2 weeks ago when local authorities were encouraged to take the lead in deciding measures. Paris takes charge but problems ahead https://t.co/mdQnKQ0ENc

The health sector reacted more positively to the new rules and several health professionals applauded the government's new restrictions.
“Unfortunately, we had come to a point where we had to tighten the screws, as they say,” Bruno Mégarbane, who heads the intensive care unit at the Paris Lariboisière Hospital, told France Info.
“We gave seen a significant acceleration of the circulation of the virus and especially a now a remarkable increase in patients in emergency rooms and in intensive care,” he said.

However, local politicians in Marseille pointed to that Covid-19 infection rates had gone slightly down in the past week and said the decision did not sufficiently consider the negative economic impact that would follow.

“This collective punishment is extremely hard on the economy of our region,” the head of the Provence-Alpes-Cote d'Azur region, Renaud Muselier, said in a statement.

Closing down nightlife amounted to “essentially a return to lockdown,” he said.

Marseille on Thursday asked for a 10-day delay before implementing the measures.

“If at the end of next week the indicators start to rise again, we will be ready to take the necessary decisions,” said Benoît Payan, Deputy Mayor of Marseille, during a press conference.

'We will die out if this continues'

Across Marseille, bar and restaurant owners expressed worry over the consequences of having to close down business completely for the second time this year, while struggling to recover from the losses caused by the nationwide lockdown this spring.

“They are pulling the rug out from beneath my feet,” Christophe, the owner of a brasserie in the city, told Le Parisien.

“I hope that we will be sufficiently supported economically,” he said.

“What I don't understand is that we only catch the virus in bars and restaurants?”

Several other bar owners echoed this, saying they did not understand the logic of targeting bars specifically and not other places that gathered crowds.

“The virus does not circulate in shopping malls, in hair salons, it only circulates in bars,” Jacques, a bar owner in Marseille, said sarcastically. “All that, that's just BS,” he told Europe 1.

The government on Thursday morning promised that they would back up the reeling sector with help schemes already in place, such as the solidarity fund that has provided grants for businesses hard hit by the sector.

“They should be reassured that we will continue (to support them), whatever it takes,” Olivia Grégoire, State Secretary for Social and Solidary Economy, told BFMTV.

“The decision is difficult. I know that it's difficult,” Grégoire said, adding that the economy minister that morning would consult with all actors affected by the measures.

“I am going to say it simply, but clearly: the state will not abandon those who are living through these extremely difficult moments,” she said.

Marseille has seen Covid-19 rates spike over the past week and currently has more intensive care unit patients ill from the virus than any other area in France.

Dominique Rossi, the president of the regional hospital group in the area surrounding Marseille, told BFMTV on Thursday morning that 45 percent of their intensive care units were filled up by Covid-19 patients.

According to France's new five-level alert system, a Covid-19 pressure over 30 percent in hospital intensive care units sees an area bumped up to “maximum alert”, which means bars and restaurants must close temporarily.

Only Marseille currently finds itself in that position on the mainland.

Bars to close early in Paris

In Paris too, one of the 11 cities where bars must close their doors at 10pm from Monday, rates have been rising and hospitals have sounded the alarm that the spiralling infection rates had led to an increase in hospital and intensive care unit admissions.

The health minister however decided not to include restaurants as part of the new restriction because unlike in bars, he said customers were seated and more socially distanced.

Etienne Gayat, an anesthesiologist at the Paris Lariboisière hospital, welcomed the new restrictions, which he said would reduce the number of infections and, as a consequence, the number of new intensive care admissions.

“We are seeing that the most affected are the under 40s and that a lot of the transmission takes place in rather festive gatherings where we eat and drink,” he told Le Parisien.

But bar owners complained that the decision would have a negative economic impact on their businesses.

Ecran, the owner of a bar in the southern 15th arrondissement, told Libération that the measures would “hurt a lot”  as he made the most money after 10pm.

“After closing down for three months, they add this? We've been struggling since the end of lockdown,” he said, adding: “It doesn't make any sense? Covid isn't going to go home at 10pm.”

Moving the parties inside

This was a common criticism from across France: by closing down bars, more people would move the parties inside where no one would ensure that participants kept with health rules in place.

In Paris, Mayor Anne Hidalgo said she had “disagreed” with the new government restrictions.

Deputy Mayor Emmanuel Grégoire on Thursday he was “doubtful” whether closing down bars was a good idea, as the “maximum risk is in private spaces.”

“There's a risk when you take too coercive measures (…) the risk is not that people stop partying, but that they move to less controlled places,” he said.

Some Parisians said that's what they would do when the decisions entered into effect next week.

One man having a beer on the terrace of a bar in the swanky 16th arrondissement told France Inter that “ending the party at 10pm was out of the question.”

“It's a shame because we'll have to take it inside instead,” he said.