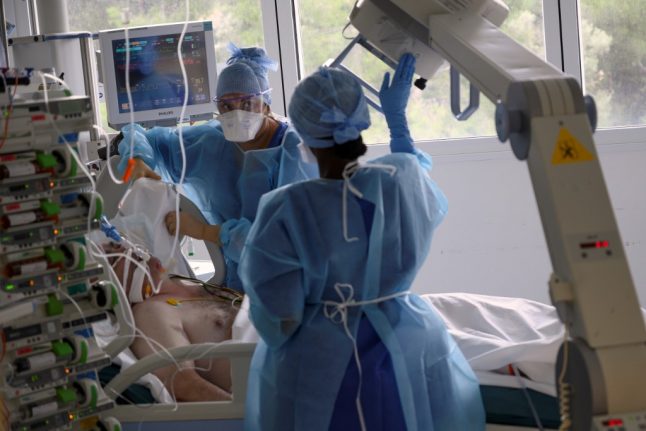 Nurses take care of a patient suffering from Covid-19 at the emergency unit of La Timone hospital in Marseille, southeastern France, on September 11th. Photo: AFP

For weeks, France's Covid-19 case rate has risen rapidly with on average around 10,000 new positives confirmed each day.

When cases first began to rise hospital wards stayed relatively empty, leading some to hope that the virus had become weaker over the summer.

However in recent weeks that trend has reversed and hospitals and intensive care units are starting to see more patients.

There are however some differences to the situation in March and April.

ICU patients is the number that health authorities anxiously watch, as it gives the best indicator for deaths in the future.

If you compare the numbers gathered since March 1st to the newest numbers available (which were collected in the seven days before September 15th in Santé Publique France's weekly report), there seems to have been a lowering of the average age of those admitted into ICUs in France.

Of the total patients admitted to intensive care units since the beginning of pandemic, 71 percent were aged over 75.

But between September 8th and September 15th – the newest detailed data available – over 75s represented just 25 percent of the total ICU patients.

That week, 35 percent of patients were aged 45-64 and 31 percent were aged 65-74, a considerably younger profile than the early days of the epidemic.

“It's clear that we are seeing younger and younger patients being admitted into intensive care units,” Célestin-Alexis Agbessi, an emergency doctor at the Bichat Claude-Bernard Hospital in the 18th arrondissement in Paris, told The Local.

Bichat has been a reference hospital for Covid-19 patients since the beginning of the pandemic. As the first wave hit early March, Bichat, previously a specialist fever hospital, transformed into a Covid-19 only-hospital along with several other hospitals in hotspot areas.

Agbessi and his colleagues increased their number of intensive care beds from 24 to 73 by transforming section after section of the hospital into intensive care areas. Most of their patients were very old and very vulnerable to serious complications from the virus.

This autumn, the doctor explained, those coming into Bichat's ICUs were slightly younger than this fall, “more 65 than 75 years old.”
“We're seeing a slight descent of the average age,” he said.
“Logically, those who are falling very ill at the moment, those who we increasingly will see more in hospitals, are the parents and grandparents of 25-40 year-olds who don't practice social distancing,” he said.
But is the younger age profile of ICU patients just a temporary phenomenon?
Rising infection rates
When infection rates first began to rise in France in July, the new cases were predominantly people aged 15-44 and the hospital wards stayed relatively empty of Covid patients.

However its last few weekly reports, Santé Publique France has warned about a worrying rise in the proportion of new cases among elderly, and the over-75s were the age group seeing the biggest increase in new cases over the seven days prior to September 15th.

Hospitals worry that ICU numbers will increase as more elderly people become infected, but the incubation period causes a time lag of around 14 days between new infections and eventual hospital admissions.
Thee total number of patients admitted into hospital intensive care units had risen to 995 on September 24th. This was more than doubling of the number at the beginning of the month, when 418 patients in France were in ICUs, according to data from public health agency Santé Publique France's website.
Numbers now remain low compared to those at the height of the pandemic in mid-April, when hospitals counted over 32,000 patients and over 7,000 ICU admissions. Starting Monday, Paris will have to close down all bars at 10pm among other new restrictive measures the government has imposed to counter the spread of Covid-19. Photo: AFP
Hotspots
However the recent rapid rise in new patients has lead to hospitals in hotspot areas sounding the alarm that their capacities were about to be strained.
Hospitals in Marseille, Paris, Bordeaux and Lyon have reactivated their Covid-19 emergency plans after seeing a spike in the number of new hospital admissions in a short time.

In the greater Paris region Île-de-France, regional hospital group AP-HP saw numbers in ICUs double from 60 to 120 in two weeks.

“We're set for another doubling of these figures in the next fifteen days, we are preparing to host 250 intensive care patients at the end of the month,” François Crémieux, Deputy General Director of AP-HP told Le Monde on Tuesday.

The government this week announced a toughening on rules regulating bar opening hours and public gatherings in all areas with high levels of spread in a bid to reverse the trend.

As of September 15th, France had counted a total of 30,999 deaths caused by the pandemic. Of these, 20,471 were registered in France's hospitals and 10,528 in nursing homes for elderly (EHPAD) and other institutions.

Over the course of the epidemic, 92 percent of the total fatalities have been people aged over 62.

France on Tuesday reported 68 Covid-19 deaths in its hospitals, the highest number of daily fatalities recorded since the summer. On Wednesday the number was 43, lower but still above the average rate of a month ago.

These numbers are currently being analysed by Santé Public France, so as yet there is no detailed breakdown of the age profile of those dying from the virus in recent weeks.

However, Agbessi said the profile of those dying from the virus “is the same as before.” That is to say very old people, often with other pre-existing complications.

“The virus has not mutated and become more dangerous yet, so a 25-year-old without pre-existing illnesses will be better protected than someone with more risk factors,” he said.

Old age is itself a risk factor, he explained. Someone aged over 75 years old was already at risk of developing serious complications from the virus. Other risk factors are pre-existing illnesses such as diabetes, dementia, heart problems and other serious illnesses.
“The more of these factors you have the more you are likely to become seriously ill or die from the virus,” Agbessi said.
“This is the crux of the problem: even if we are better prepared now.. there is a sort of selfishness in the youth that puts their elderly parents and grandparents at risk,” he said.
During the first wave in March and April, the virus tore mercilessly through the country's elderly nursing homes (EHPAD) in a way it has not yet done this time around. An employee is having lunch in a room at the morgue of the Hospital (AP-HP) Bichat Claude Bernard in Paris. Photo: AFP

Hygiene protections for these institutions have improved, but the number of clusters – grouped outbreaks – across the country's EHPAD has grown, reaching a total of 180 on Tuesday, authorities worry that the death rate in these institutions will increase in the coming weeks.

Agbessi said worst-case scenario would be to see hospitals unable to cope with an the increasing flow of new patients.
“It's the heaviest burden of all. Hospital workers are exhausted, many are experiencing burnouts. It's a never-ending circle that takes enormous time and resources,” he said, adding:

“This winter could be very difficult, as we will see an increase in the number of other respiratory illnesses such as the flu. What are we going to do then?”