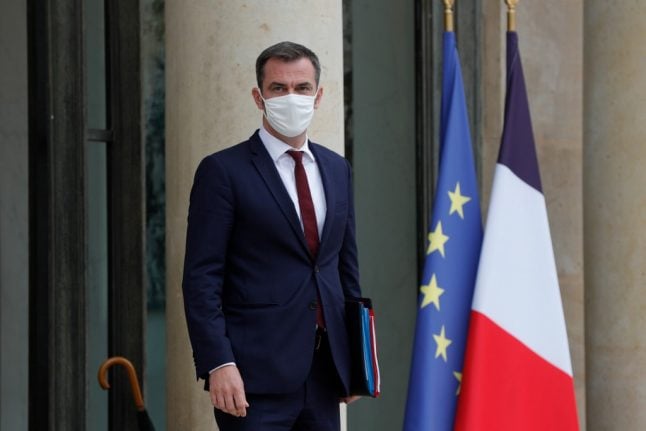 “Let’s be clear, the situation is continuing to deteriorate,” the health minister said during a live speech to the nation where he updated the population on the latest on the Covid-19 virus development in France.

“There is still time to act,” Véran said.

“If we don't take steps quickly, we risk to reach critical thresholds in certain regions.. and a huge stress on hospitals in several regions,” he said.

Veran announced that from next Monday all bars would close early in cities of Bordeaux, Lyon, Nice, Lille, Toulouse, Rennes, Sainte-Etienne Grenoble, Montpellier, Rouen and the capital Paris and the surrounding suburbs in the petite couronne.

Restaurants in these cities however were not affected by the restriction.

As part of France's new Covid-19 alert system these cities were all classed on heightened alert (alerte renforcée).

Marseille and its surrounding area was classed as maximum alert (alerte maximale) meaning all bars and restaurants would close completely from Saturday. The measure along with other restrictions are designed to stay in place for two weeks said the minister but may be extended if the spread has not been brought under control.

The announcement was met with anger by Marseille's mayor Michele Rubirola, who said she had not been consulted on the measure she described as “unjustified”.

Overall, the new measures are significantly less rigid than those just announced in the UK. Right decision? Wrong decision? But the implied threat is that other areas will be shifted into the new, enhanced and max alert zones if the epidemic numbers there grow worse.

“I can't accept that the people of Marseille are victims of political decisions that no one can understand,” she said.

The minister's announcements came as French public health authorities reported 13,072 new cases in 24 hours — a new record since lockdown ended — and 783 hospital admissions with coronavirus as well as 43 new deaths.

It follows weeks of spiralling Covid-19 rates across the country and increasing pressure on hospitals.

“The worsening of the situation is pushing me to give you a solemn message,” Véran said, urging the population to be “vigilant, stick to hygiene guidelines” such as rigorous handwashing and wearing face-masks, but also practice social distancing.

He also urged people to work from home where they could.

“Don't go out with different people several times a week. If everyone meets with fewer people we will all be a little better off,” he said.

“The circulation of the virus is strongest in the most densely populated areas, that is to say the largest cities,” Véran said.

MAP: Where in France are Covid-19 cases rising and which areas are low risk?

The new classification will have direct impact on what kind of measures local authorities need to introduce, with those on higher levels of alert having to toughen restrictions “as of Saturday”.

Alert – The are 69 départements on ‘alert’ (see map in tweet). This means there is a high level of spread with an incidence rate of more than 50 positive cases per 100,000 inhabitants, however in these areas the virus has had little impact on intensive care units and on the elderly in the area.

Local authorities in these areas may take extra measures to curb the spread, but they are not obligated to do so.

However all these areas must limit weddings, parties and social events to 30 people maximum.

Veran said four cities currently on “alert” level are at risk of passing to the “heightened alert” level. They are Tours, Strasbourg, Dijon and Clermont-Ferrand.

The cities considered as on 'heightened alert' were: Bordeaux, Lyon, Nice, Lille, Toulouse, Rennes, Sainte-Etienne, Paris and the surrounding suburbs in the petite couronne, Grenoble, Montpellier and Rouen.

New measures for these cities include: closing bars at 10pm at the latest, but authorities may decide earlier closingtimes, limit the number of people allowed to gather in public spaces to 10 maximum, lower the threshold for big events from 5,000 to 1,000 and ban all large parties such as student parties. All community halls will be closed too.

The southern port-city Marseille and overseas département of Guadeloupe were bumped up to this level.

Local authorities in these areas must close down bars and restaurants completely in addition to all public spaces that don't already have a strict health protocol in place.

The measure will be in place for at least two weeks but may be extended if the spread of the virus is not brought under control.

An even higher alert level where a “state of health emergency” can be declared is also part of the new system but no part of France had reached this point, the minister said.

Since easing the lockdown, the French government has repeated that their foremost goal is to avoid a second round of nationwide confinement, which had crippling impact on the economy.

Instead, the government's strategy has been to monitor the virus closely and urge local authorities to impose measures adapted to their area to curb the spread.

However, even with nationwide rules making face masks compulsory inside public spaces and on public transport, and with cities piling onto these rules with extra restrictions, cases have continued to rise.